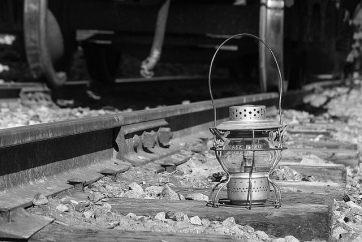 My father walked through the darkness of the railroad yard. This was not the world he had wanted to live in. But, his farm was a bust and my mother had convinced him it was time to leave the country and move to the city of Shreveport and find a job. They had two children to raise; four mouths to feed and the Depression had been devastating on the farm.

My father came to the city and they moved into a house on Buckner Street along with other relatives. Life was hard but at least working for the railroad, my father had a steady paycheck. The one drawback was the hours: he had the graveyard shift. Now, he walked through the darkness toward the bus ride back into the city and to home. The railroad yard was filled with hulking, sometimes rusting railroad cars crouched on their tracks. This land was alien to my father; nothing at all like the rolling hills of Saline, Louisiana with its fertile soil and towering pines. His heart raced with anxiety as he stumbled over the tracks and dodged around the railroad cars. And then, the ground opened up beneath him and he was falling through darkness into shadow. He hit the ground and rolled and found himself in one of the maintenance pits over which railroad cars were driven to work on their undersides. He realized if he had hit his head or broken an leg, he might have stayed there until he died. He climbed painfully out of the pit of darkness and despair and resolved to find a better job.

My uncle Marvin was a unique individual. He was tall and round with a cherubic face and a quick wit. When he would call the house I would say, “Hello?” and he would answer “Is that you?” I was always confused around him. But, he worked for the Post Office and the next day spoke to my father about filling a position at the Post Office. Normal hours. No pits to fall in. Paper cuts galore, but my father could deal with that. He took the job much to my mother’s relief. They were NOT going back to the farm.

1941 came quickly and Thanksgiving was a time for true thanks. My father, mother, sister, and brother had a home; food on the table; and my father had a job he could more than tolerate. My father still longed for the farm but my mother was unrelenting. Over the past few months, sisters and brothers had come through the house on Buckner Street for brief stents as they found jobs in Shreveport. The world was changing. War occupied most of Europe and the country folk were being drawn into the war to end all wars. Fresh faced young men whose life was walking behind a plow and a mule were faced with the prospect of going across the ocean to a world they could not begin to imagine. Shreveport, a growing city in northwestern Louisiana was foreign enough. 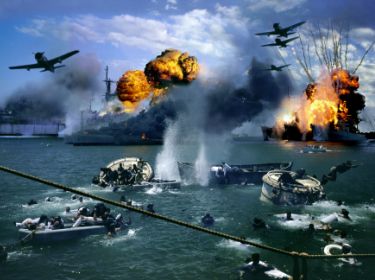 And then, December 7, 1941 came. My father and Mother learned of the attack on Pearl Harbor after church. They were terrified. The United States was now officially in the war. What would become of our country? What would become of the uncles who were even now being drafted into the armed forces? What would happen to my father? He was twenty seven when the war broke out. But, because he worked for the federal government at the Post Office, he was not on the first list of draftees. Most men didn’t have to be drafted. They volunteered. The attack on the United States was horrific and these men, fresh from the farm, wanted revenge.

In June 1942, shortly after my father turned twenty eight, he was drafted. He was thirty days away from being sent off to Europe. He had thirty days to get his affairs in order; to insure my mother and brother and sister would be okay while he was overseas. At the last minute, with only two days left until he was deployed, the Unites States government lowered the age of draftees to twenty six. My father didn’t have to go and stayed with the Post Office. My uncles were lucky. they survived events like the Battle of the Bulge and came back to the country after the war. But, my father tells me the world changed forever on December 7th. It changed for my family and it changed for my nation. 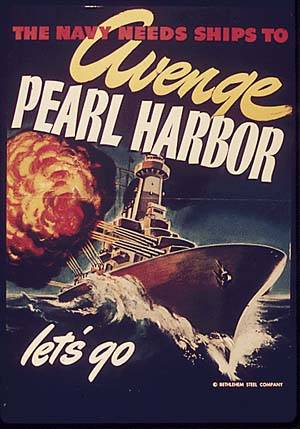 Six years ago, I immortalized my parents’ story in the play, “The Homecoming Tree”. It was performed three consecutive nights at Brookwood Baptist Church in November, 1995. It is the story of that house on Buckner Street and the men, women, and children who lived there at the beginning of World War II. It tells the story of a young boy, age 13 and his coming of age when he realizes his father may not come home from Pearl Harbor and he has to become “the man of the house”. This coming of age is represented by the boy cutting down the family Christmas tree by himself.

In writing, producing, and directing this play, I was able to honor my father and his extended family and the sacrifice of their incredible generation for our personal freedom. We no longer know what it means to be “the man of the house”. Most men today abandon their families to find their personal identity; to discover themselves often in the arms of a younger woman or in the throes of drugs and alcohol. Most families do not resemble the nuclear family of the forties. And, it is certain, that most households have no idea of God and country; of self sacrifice and dying for what you believe in. Truth is, most of us now believe in ourselves and therefore we are dying for ourselves with overindulgence, personal selfishness, lack of manners, rampant consumerism, and would never consider sacrificing our lives for a principle or a value. The exception are those valiant men and women who still understand the necessity of defending the freedom this country still represents, albeit weakly, to a world that no longer regards the United States as a great country.

On this day, the 70th anniversary of the attack on Pearl Harbor, I want to ask everyone to revisit that event; to talk to a veteran; to examine the cost of their ability to sit in front of a computer and have total, unfettered access to a world of information — true freedom. Freedom is NOT free. It cost thousands their lives on this day seventy years ago. And we must take up the torch of self sacrifice and keep the fire burning if for no other reason than to honor them. Honor a member of our armed forces today. Stop, shake their hand and look them in the eye and say, “Thank You.” There is no better way to remember Pearl Harbor!

Posted on December 7, 2011, in My Writing and tagged Pearl Harbor, Sacrifice, Shreveport, The Homecoming Tree, World War Two. Bookmark the permalink. Comments Off on A Remembrance of 1941.