Just a note here. I managed to catch up and post two blog posts in 12 hours so make sure and check out the one before this one!

I don’t know where to start. I’m trying to sift through the 350 photos I took on Friday. We left Queenstown at sunrise on a bus driving 4 hours to Milford Sound. Milford Sound is one of the most beautiful spots on the earth. It is a “sound” carved out of the rock by glaciers thousands of years ago. Properly, it is a fjord. And the entire lower, outer segment of the south island is Fjordland National Park. It was here, while on the way to Milford Sound that we saw the true Southern Alps covered with ice and snow. After arriving at Milford Sound around 130 PM, we set out on the water for a 3 hour tour (don’t go there!). Then, we left Milford Sound for the bus drive back to Queenstown and arrived at 830 PM. A 13 hour day!

I was exhausted from very little sleep the night before. As I mentioned yesterday, I fell off of a really large boulder and the pain in my left elbow and in my chest kept me awake most of the night. Fortunately, the bus ride was sedate and the tour of the sound allowed me to stand or sit so we did very little walking.

Here is a photograph of the map of the national park. Queenstown is in the far upper right hand corner and if you follow the red line down through Te Anau and around and up again to the far left hand corner, you will see the route we took.

Te Anau on the way to Milford Sound

The beginning of the Southern Alps 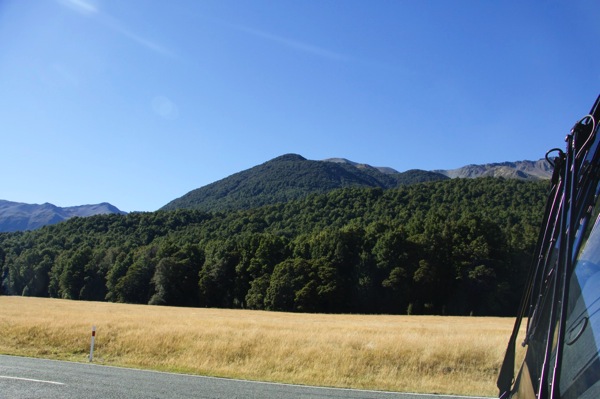 Sherry and Alex. It was cool especially when we got on the water. 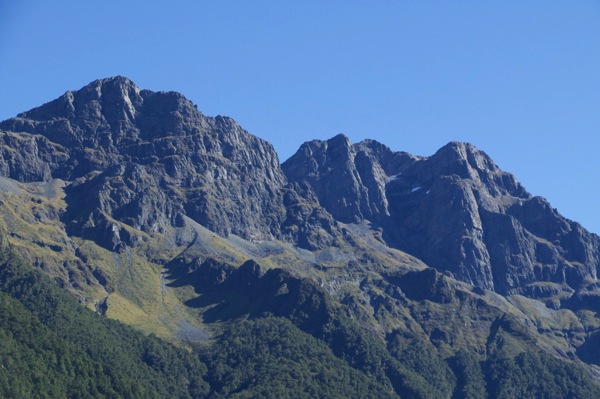 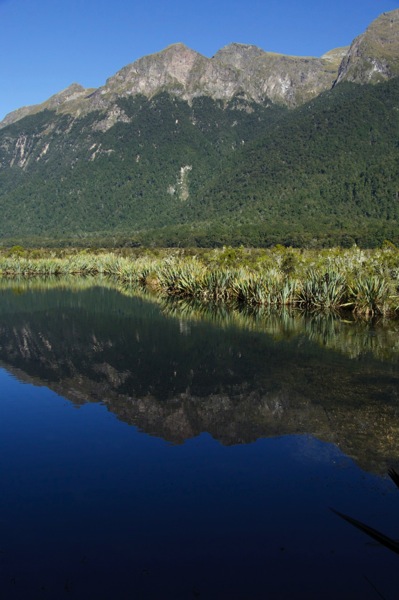 Along the way, we stopped at the Mirror lakes! 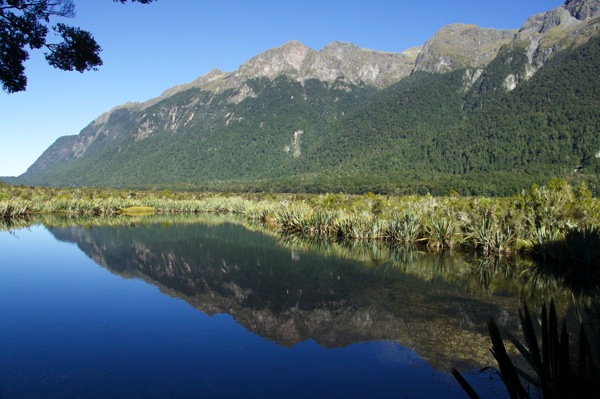 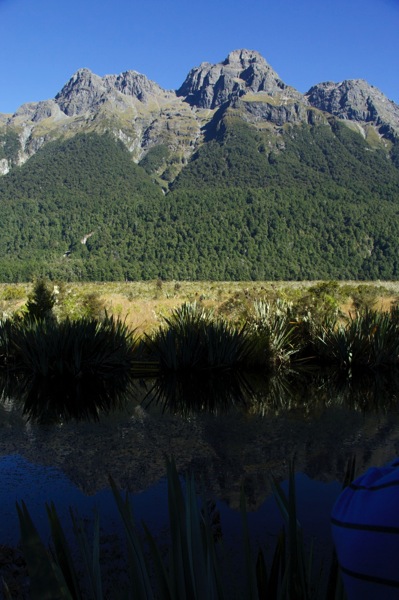 A river along the way showing the snowy peaks in the distance. 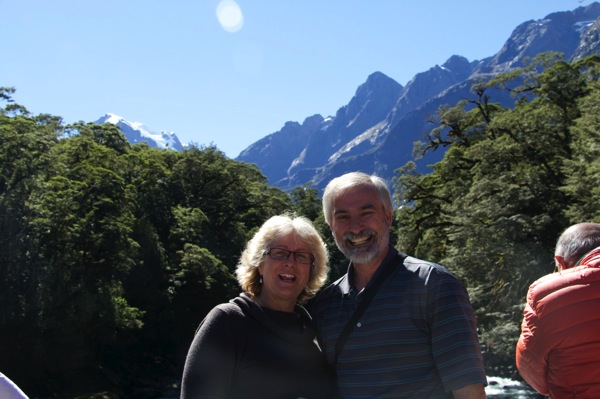 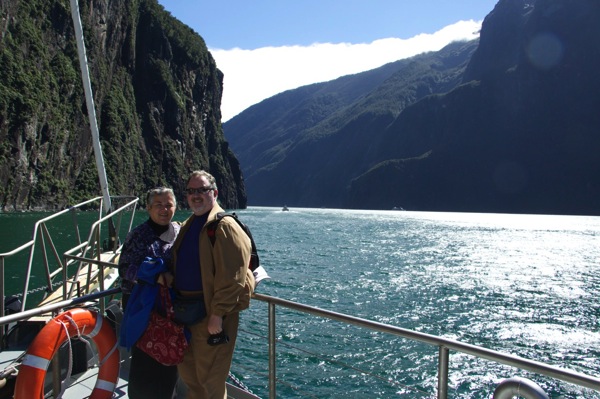 Finally on the boat on the sound heading out to the Tasman Sea, the part of the Pacific Ocean between New Zealand and Australia. The wind was unbelievable here up to 80 knots! 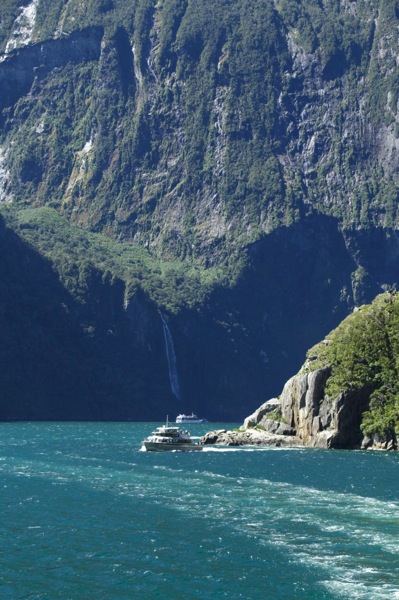 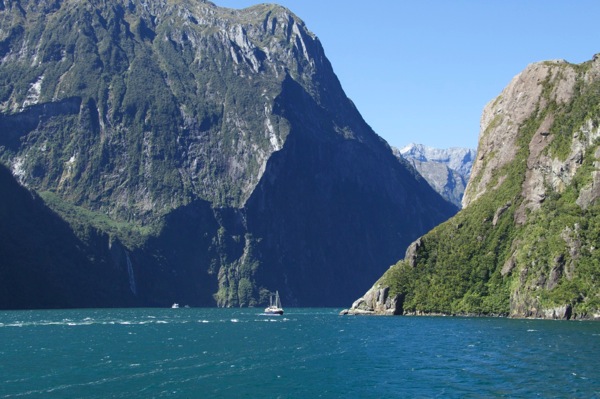 The “Queens of duh woyld!” 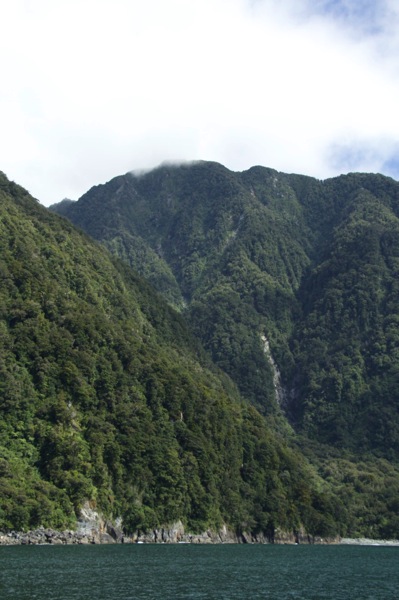 We saw several of these white streaks on the mountain. This is where trees, barely perched on the thin moss and rock, break loose and tumble down in an avalanche or ‘treevalanche”. 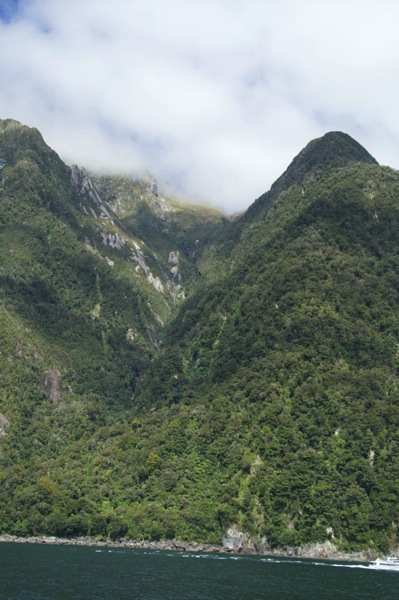 One of several falls on Milford Sound.

As well as seals sunning on a warm rock.

Could this be the elven door to the Mines of Morea? Speak “friend” and pass! 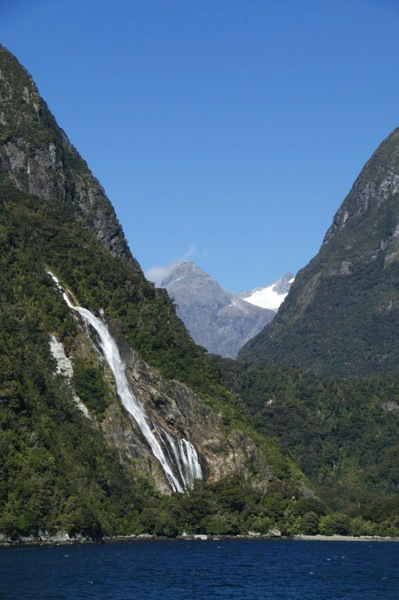 Heading back toward port from the open sea. 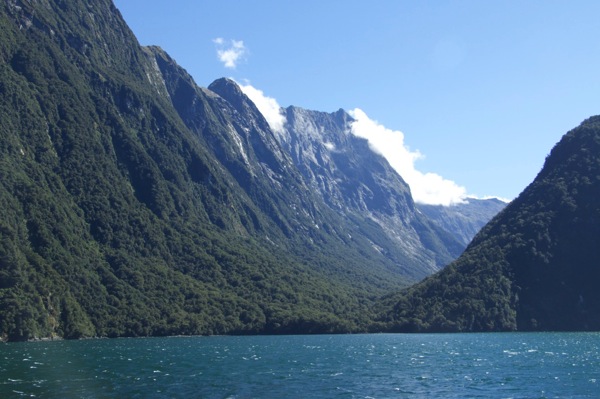 That’s enough scenery overload for today. I am now caught up with my blog posts. Today, here is Saturday, America’s Friday and we are touring Queensland before heading back up the west coast toward the north island. We have now come from tip to tip of this wondrous land and the final leg of our journey is about to begin.

Say a quiet prayer for our vehicle. It was smoking Thursday night upon arrival here and I can’t blame the poor thing!

Tomorrow, I hope to show you some maps along the way and throw in some photos you haven’t seen yet as I recap the journey so far.