We are now heading up the west coast of the south island back toward Napier. I have many pictures I did not share because of wifi access and time pressure. Today, I want to show a map of each area of our journey and a few pictures I haven’t shared before.

We started out spending two days in the largest city in New Zealand, Auckland high up on the northern tip of the north island.

Here we are in the Skytower. 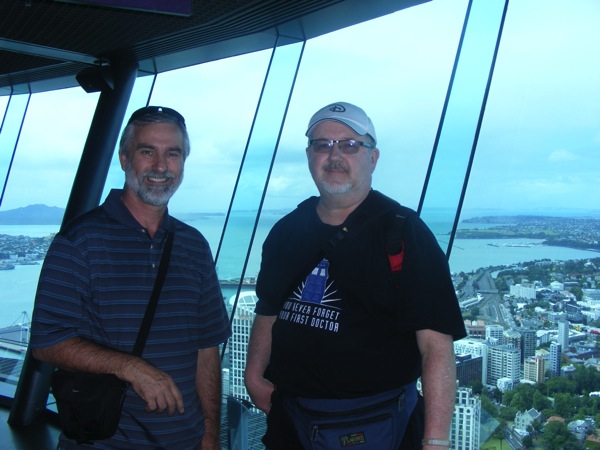 With Alex and Grant on the ferry from Auckland to Devonport.

On Day 3 we traveled to the Waitamo Caves where we were not allowed to take any pictures. Then on to Alex and Grant’s friends house — Russell and Linda. We spent the night there just out of Hamilton/Cambridge area in the midst of farmland and then set off the next morning for my most anticipated destination, Hobbiton. 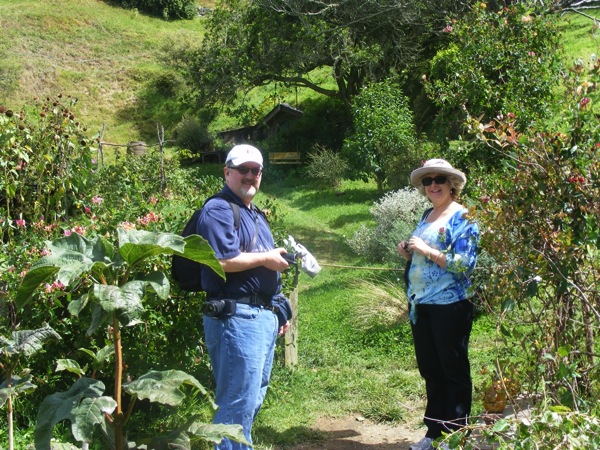 In the real garden at Hobbiton.

The bridge to the Green Dragon pub. 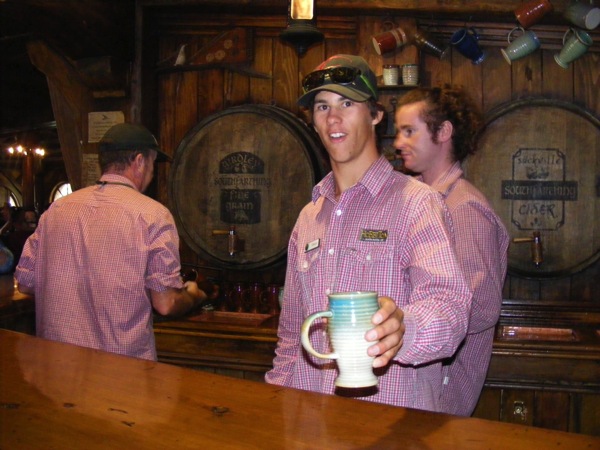 Our guide, Shawn handing out cider at the Green Dragon Pub.

We left the Hobbiton area and headed for the thermal playground of Rotorua. 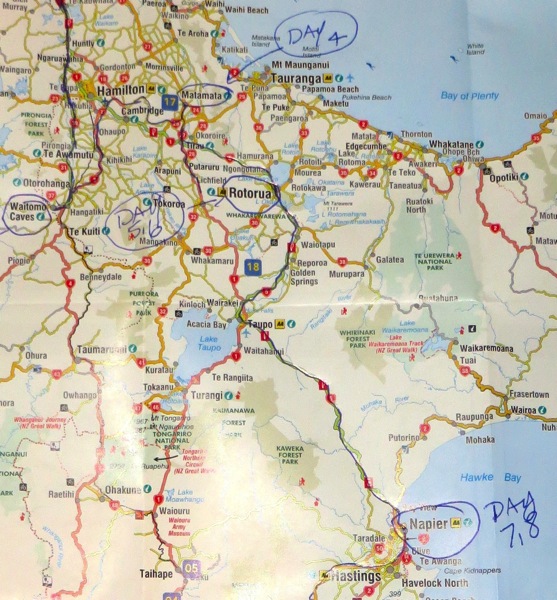 Here we spent two days in the area seeing the sights and sounds while I got sick from the virus that had shut down Sherry for the past two days. 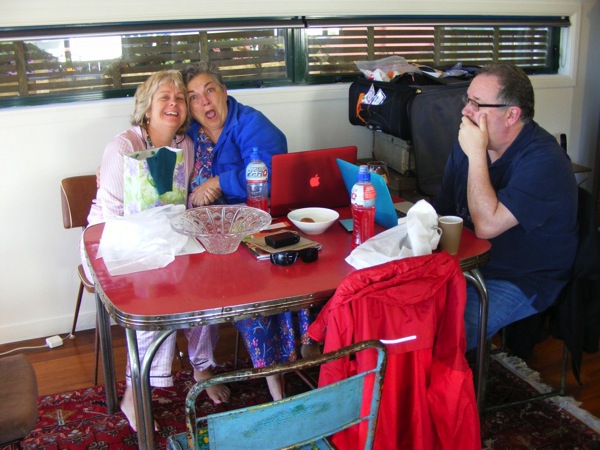 In our “shared” condo in Rotorua. 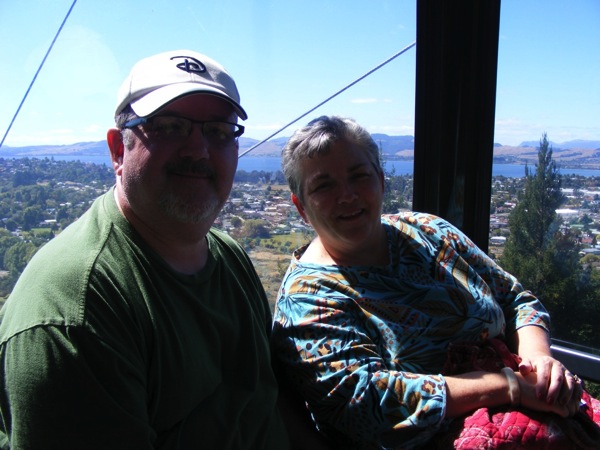 Riding the gondola in Rotorua and then riding back down on the Luge.

After two days, we headed out of Rotorua toward “home” to the Sitchbury household in Napier. Along the way, we stopped at several thermal “playgrounds” with hot bubbling mud pits, volcanic steam vents, and colorful chemical pools. 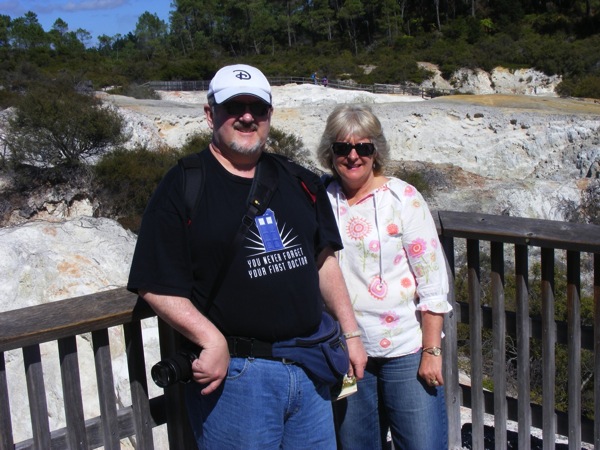 We arrived for our first weekend in Napier and settled in for two nights at home. Here we traveled up to Te Mata, the high peak overlooking Hawke’s Bay and Napier. 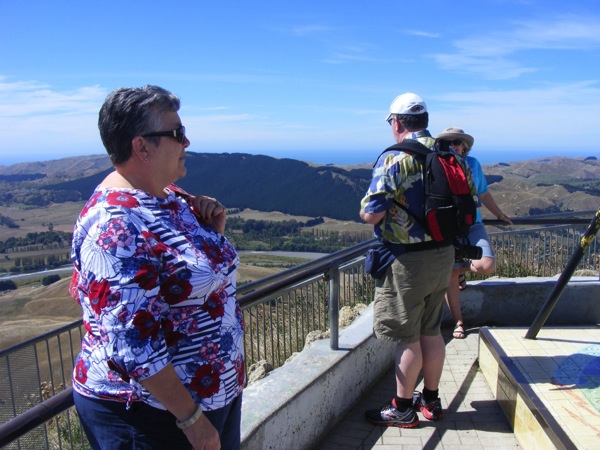 Sunday evening, we headed out for Palmerston North to meet with the Stitchbury’s oldest son, Sam. We spent the night there and got up on Monday morning and headed on into Wellington.

Here we visited the WETA workshop and rode the cable car up the side of the mountain overlooking Wellington and its harbor. On Tuesday, we boarded the ferry to cross the strait to the south island. 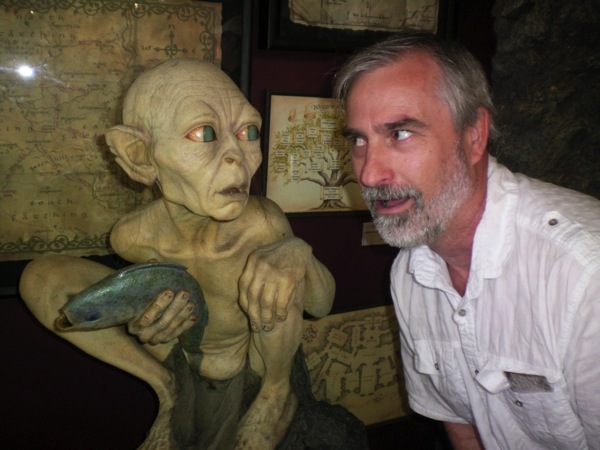 And there I will stop for today and continue our review of the south island later. For now, my feet feel as tired as Bilbo’s feet.