My debut novel, “The 13th Demon: Altar of the Spiral Eye” is available this week and my launch party is Friday night, October 7th, 2011 from 6 to 8 P.M. at Brookwood Baptist Church (corner of I49 and Bert Kouns) in the Well, the coffee shop. I will be introducing the ink*well, a regional Christian artists’ community and speaking briefly on “One Book’s Journey: How to Get Published”. Those who purchase a book are entered into a drawing for one of the following: an Ipad2, a nook touch, and a Kindle WiFi. Coffee and snacks are complementary. Click on this for a flyer: bruce-flyer 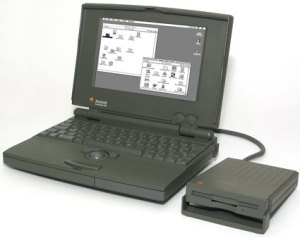 I bought my first macintosh in 1991. I was disgusted with the PC world and my favorite computer, the Amiga had gone bankrupt so I bought this thing called a Powerbook 140. It had a black and white screen, a trackball, and one mouse button but I fell in love with its simplicity immediately. It wasn’t long before I was a Macintosh convert. Not sure why but I realized that I had a tendency to gravitate to the underdog. Everyone else was using PCs and passive matrix laptops with this new operating system called Windows.

But, I sensed that there were some people out there who thought differently from the mainstream. I saw this in the Powerbook and in the Macintosh desktops to come. I saw my first “Personal Computer” in 1977. It was called an Apple II and it consisted of a beige box with an integrated keyboard, a funky looking thing called a mouse, and a green and black monochrome monitor on which you could play this game called “Pong”. I wanted it! But, it was only selling for a measly $4500! And, being a starving medical student, a computer was out of the question.

Now, 16 years later, I had my first Apple computer and this thing was truly science fiction come to life. It was different. Just like I enjoyed being. Different, unique, thinking outside the box, looking at life from a different perspective. When Apple was almost gone under the hands of Gil Amelio and selling for $11 a share on the stock market, I heard rumors Steve Jobs was coming back as part time interim CEO. I told my wife to buy as many shares of Apple as we could afford! People thought I was crazy. But, I knew that Steve Jobs, like Walt Disney had a singular vision of creating the highest quality experience. Jobs did this with a personal computer and made it more than just a box with buttons and mouse. He wanted it to become a tool of creativity; a natural extension of the artist’s mind.

In 1999, I really “thought” different when I wrote “The 13th Demon: Altar of the Spiral Eye”. I had a dream that people would want to ready a gritty, realistic novel about the conflict between good and evil and learn in the process there is a God and the evidence for God is overwhelming! But, I ran into editor after editor that could not think “different”. Publishing is a business. It is about selling books. And, it is about predicting the future. What will people be reading two years from now? I thought I knew. I was right. But, it would be more like five years before people would be reading books by authors like Ted Dekker. I like to think I was there at the beginning, and maybe just a little premature. I was thinking “different” and no one else could think with me.

It took 12 years. I had to be persistent like Steven Jobs. He left Apple at the height of his creativity, the launch of the Macintosh in 1985 and it would be, well 12 years before he came back to Apple and made them see how his “dream” could change the world. It was a slow climb after that but look how his imagination and creativity have changed our world.

It took me 12 years to get “The 13th Demon” to the marketplace. Now, I am nowhere near the level of a Steven Jobs. I may fade quickly into obscurity after this book launches. But, I know that God gave me a dream and when God places us in the position to become a part of His work and His Story, we have to think “different” from the world; we have to think way outside the box.

My conclusion is this: John Maxwell said it well, “There are dreamers and then there are those who make their dreams come true.” A dreamer can go back to sleep at night and come up with another dream. One who makes his Dream come true focuses all of his/her energy; all of his/her resources on accomplishing that dream. And that requires the creativity of thinking “different” of thinking “outside the box”. Thank you, Steven Jobs for your legacy. But, more than that, thank you God for thinking outside the box and becoming flesh and dwelling among us and showing us ultimate love and dying the final sacrifice for our disobedience. For, finally and completely, Steve Jobs is responsible for how he spent his life and I do not know where his heart and soul were in relation to God, but he will stand before Christ and answer for his life. When I stand before Christ, I want to know that I thought “different” from the world and did everything in my power with great focus and perseverance to change this world through the love of Christ!