My father was obsessed with television sets. During the football season, he would have three televisions going at the same time and be listening to a game on his transistor radio. This was long before cable when we could get only three channels way out in the sticks of Blanchard, Louisiana. In 1965, he did something unthinkable. You’ve got to understand our financial situation back then. My mother had a job — not a common thing to have both parents working in 1965. She drove a school bus and my father worked at the post office. We weren’t rich at all. We lived in the country and raised most of our food in my father’s garden. To give you an idea of how poor we were, one year I wanted the newest toy sensation, Creepy Crawlers. You purchased the box and it it was a small “oven” that heated up metal molds with shapes of various insects. The set came with gooey plastic in a bottle you could squirt into the molds in various color combinations. Then, you put the molds in the oven and pressed the timer. In minutes, the opaque colorful liquid would harden into a translucent rubbery substance. You peeled your creepy crawlers out of the mold and you had instant vermin!

I wanted this for Christmas so bad. My mother and father pooled some money and bought me an expansion pack instead. Four molds and three bottles of goo. But, no oven! The expansion pack was much cheaper than the whole box. So, here I was on Christmas morning holding my little metal molds over the fire in the fireplace to make my creepy crawlers. Over and over, the things would catch on fire! It’s a wonder I didn’t suffer third degree burns!

Back to 1965. My father came home from Sears and Roebuck store with a huge cardboard box in the back of his old green truck. Much to my mother’s dismay, he had spent a pot load of money on something new. Something big! He and my brother loaded the box into the living room and my father revealed a huge console television. But, it wasn’t just any huge television (Only 24 inches screen — a baby compared to today’s monsters) it was a COLOR television!

Over the next few months I was stunned and amazed at the color images that flickered across the screen. Not all shows were in color. Certainly, Walt Disney’s Wonderful World of Color was! My favorite show at the time was still in black and white — Lost in Space. I was a science fiction fanatic and couldn’t wait each week to hear those famous words uttered by the robot, “Danger, Will Robinson!” 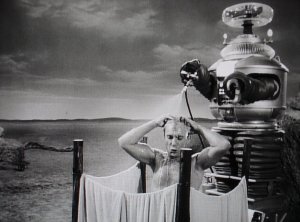 In the late summer of 1966, one of my mother’s new TV Guides arrived in the mail. For her, it was a little bit of Hollywood glamour in the red clay and pine hills of northern Louisiana. She loved to do the crossword puzzle which featured the names of famous movie and television stars. This TV Guide carried the image of two men dressed in gold and blue tunics with the title of a new show underneath. “Star Trek”. Star Trek? What was this? A new science fiction show in color! I read about the show set on the starship Enterprise with its leader, Captain Kirk and his alien first Officer Mr. Spock. Mr. Spock? Wasn’t that a famous children’s doctor? 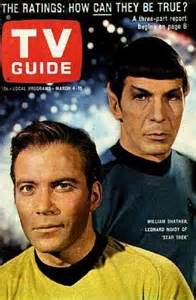 On a cool September night, September 8, 1966 at the age of 11 I had finished my supper and was settling down on our couch in front of new color television. My mother and father were off doing something around the house. I guess I’m fortunate there were no Westerns on that night or I would have never seen this new show. The screen came to life with vibrant color — reds and golds and blues and exotic planet sets that blew my mind. I watched as this doctor, “Bones” McCoy showed up in coruscating sparks of light along with his Captain Kirk on a lonely planet to meet his long lost girlfriend who had married an extraterrestrial archeologist. The opening of the show was so ordinary and yet so exotic as if it was perfectly normal for someone to “beam” down from a starship onto the surface of an alien planet. There were no silly sayings or rambling robots. This was pure drama, straight to the heart of real characters. In later years, this paradigm shift would be responsible for me leaving behind the childish comic books of DC for the more mature comes of Marvel. I was enthralled, gripped, captured by the story that unfolded before me. The red shirt ensign getting the life sucked out of him by the beautiful woman who was Dr. McCoy’s love. How could SHE be a monster? She looked so normal and so beautiful! And, then the big reveal. At the end of the show when McCoy’s girlfriend is killing his Captain and we see the thing for what it really was! Oh my! I ran and hid behind the couch. I was traumatized but captivated. I could not believe my eyes. This was the most amazing show in the history of shows!

“Space, the final frontier. These are the voyages of the starship Enterprise. It’s five mission: to explore strange new worlds, to seek out new life and new civilizations; to boldly go where no man has gone before!” Then that fantastic fanfare with the warbling vocals almost alien in tone. To this day, it gives me a thrill.

I never missed an episode of Star Trek. I wrote a letter to stop its cancellation. Dr. McCoy would become my role model when I decided to become a doctor. I can say that my life was deeply affected by Star Trek. The three main characters for me represented the three aspects of our personality. Mr. Spock was the cold, calculating intellect, the superego. Captain Kirk was the visceral, go from the gut leaders the id; and Bones was the humanity, the heart that brought the two extremes together. My love for science grew out of Star Trek. My desire to be “just a plain old country doctor” came out of my love for the character of Dr. McCoy.

In 2008, I had the pleasure of meeting Leonard Nimoy at Book Expo America. I snapped a picture of him but did not have the privilege of getting a picture with him, but I did shake his hand and thank him for the character of Spock that so shaped and influenced my life. I missed out on seeing William Shatner during that trip and unfortunately, DeForest Kelley who played Dr. McCoy had passed away a few years before. 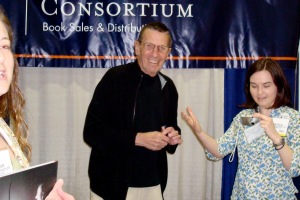 Fifty years have come and gone. I’ve sat through every movie, every animated episode, every spin off. In 1996, I took my son, Sean, to Pasadena California for the 30 year celebration of Star Trek and met many of the stars of Next Generation and Voyager. He dressed in a Star Trek costume that year.

So, to honor Star Trek and its fifty year anniversary, I spent a lot of money and went to Dallas FanExpo in June to meet William Shatner. What a pleasure and a joy to actually meet Captain James Tiberius Kirk. Here is the photo I had made with Willam Shatner and notice the tee shirt I’m wearing. 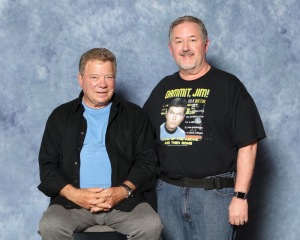 Here’s to another 50 years of “boldly going where no man has gone before!”