Editing the Book — The Femme Fatale

Meet Vivian Darbonne. Without the apostrophe. In “The 13th Demon: Altar of the Spiral Eye”, Vivian is a minor character serving as the “administrative assistant” to the evil Robert Ketrick. She is seductive and surly and her catch phrase is “looky what the cat dragged in”. She drips with Southern charm but beneath her pouty exterior is a calculating creature of pure evil.

In my upcoming book, “The 12th Demon: Mark of the Wolf Dragon” due in October, 2012, Vivian becomes a major character. I recently began my first edit of that book with my editor for Realms books. He had some suggestions for Vivian.

Even the most direct women, I believe, seduce with words and physical suggestion before taking action. Coquettes and Sirens gain sexual power over their victims through the tease, through mixed signals, and through seeming helplessness. I want the audience to be seduced by Vivian. To love her, pity her, and hate her at the same time. You have to work to make her more human, less black leather.

A mysterious and seductive woman whose charms ensnare her lovers in bonds of irresistible desire, often leading them into compromising, dangerous, and deadly situations. She is an archetype of literature and art. Her ability to entrance and hypnotize her victim with a spell was in the earliest stories seen as being literally supernatural; hence, the femme fatale today is still often described as having a power akin to an enchantress, seductress, vampire, witch, or demon.

The list of literary “femme fatales” was long but two examples from films interested me. First, the character portrayed by Mary Astor from “The Maltese Falcon”. This is one of my favorite movies featuring Humphrey Bogart as Sam Spade and directed by John Huston. I immediately located the movie in my iTunes list and watched it again.

The first time I really sat and watched this movie was in 2005. I was preparing my script for “The Homecoming Tree”. This play was set in 1941 and I wanted to see a movie from that year. Watching the movie helped me work out the nuances of behaviors and habits from that period and most importantly, how men and women interacted.

Astor really irritated me. From the first frame I didn’t like her. I guess it was because instinctively I didn’t trust her. What was it about her that made me not trust her? Maybe it was because she was so ingratiating and so smooth with her conversation. So calm and unflustered. I never like her the entire movie, but I had to admit she was one brazen dame!

What qualities did she exhibit that classified her as a femme fatale? She was seductive, vulnerable, conniving, and slowly reeled in every man she met. Okay so this was one model to use for Vivian. But, there was another movie that I recalled from the 1980’s. It was a very steamy, very explicit movie by one of my favorite writers, Lawrence Kasdan. He had written the screenplays for three of my favorite movies, Raiders of the Lost Ark, The Empire Strikes Back, and Return of the Jedi. And, if you think about Leia in Empire and Marion Ravenwood in Raiders, they both have a bit of the femme fatale. But, nobody, and I do mean nobody can compete with Kathleen Turner as Matty. I tried to watch this movie again but had to turn if off several times when my wife walked through the room. Yes, I felt very, very guilty. But, Matty’s character is the perfect femme fatale for a more modern age than 1941. 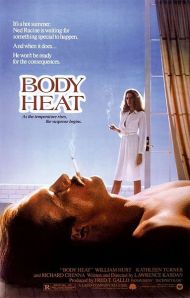 What sets her apart from Mary Astor’s character is the give and take with the man in her life. She pulls him close with her seduction than pushes him away. She entices him with subtle words then slaps him across the face and pushes him out the door. The most famous scene is near the first part of the story. Ned has visited her house for the first time and she has locked him out. Matty is standing in the foyer and she has locked Ned out. He goes from window to window to door and Matty is not moving. She sends the message, “I don’t want you to come in. But, I do want you to come in.” Finally, Ned breaks out a glass door and they, well, they connect.

Matty is up to no good and (spoilers here) she sets Ned up to kill her husband and take the fall then disappears with all her husband’s money to some exotic island.

Back to Vivian. How can I transform her into the perfect femme fatale? How can I take her seductive demeanor and make her helpless and fickle? That is the challenge. Vivian is a major character in “The 12th Demon” and clashes right off with Rudolph Wulf, a man in league with the twelfth demon. Now I have my work cut out for me. So, if you’ll pardon me, Vivian and I have a date tonight. Don’t worry. I’ll keep a close eye on her!

Do you have a favorite “femme fatale”? Share with me. Oh, and if you haven’t read “The 13th Demon” pick up a copy and meet Vivian Darbonne without the apostrophe. See what the cat dragged in!