← The Lesson of the Gumdrop Tree
Follow Up on Interview with Dr. Stan Monteith →

Either you get it or you don’t.

It’s not a matter of arrogance on my part. It is a matter of appreciation of a well done, well written story.

(Spoilers, if you haven’t seen the Christmas Special. Skip the next sentence!)

The pivotal one word answer, and I saw it coming, was “pond”.

If you have no idea what I’m talking about, let me enlighten you. Way back in the late 1970’s, I caught a poorly constructed science fiction show on syndication called “Doctor Who”. The Doctor was a tall, bushy haired man with a long striped scarf and a beautiful companion named “Sarah Jane”. I have written in the past of my family’s encounter with the actress who portrayed Sarah Jane, Elizabeth Sladen, on a train from Cardiff, Wales back to London. This show had a strange appeal to me, but its effects were coarse and its story sometimes contrived. It was but a passing fancy.

A few years back, my daughter, Casey, asked me to watch a new show she had caught on SciFi channel. It was about this doctor and his companion. I rolled my eyes. Old news. Bad show. But, she assured me it was a new show; a revival of the old show. I finally watched the Christmas special featuring David Tennant as the “tenth” doctor. Within about ten minutes, I was mesmerized as alien Santas and spinning Christmas trees of death put all of those memories of a poorly executed show to an end. This was fascinating. And so, began my journey into the world of Doctor Who.

It took some doing, but this last year, I managed to get my son, Sean, and his wife, Jennifer interested in Doctor Who. Within a couple of months they were born again companions of Doctor Who! In fact, their fascination with the show put Casey and me to shame. Soon, Jennifer’s sister joined the ranks and we decided that this Christmas we would have a Doctor Who Christmas party and watch the much anticipated Doctor Who Christmas special.

It was grand fun! Casey’s best friend and, essentially her sister, Sarah, also a Who convert joined in. We decided to dress up as characters. Casey dressed up as the eleventh doctor, the “raggedy doctor” with the red bow tie. Sarah blew us all away showing up as River Song in her denim outfit and holster and revolver (only she ended up with a banana because we all know that “one should never come to a party without a banana”)! And, although I am considerably older and fatter than the original fourth doctor, Tom Baker, I dressed up as the fourth doctor complete with scarf, hat, awful wig and a bag of jelly bellies. I also had the sonic screwdriver of the fourth doctor, thank you.

Now, you may think this is insane. But, Sean, Jennifer, and I had this conversation the other day about the doctor. First, you must realize that Russell Davies, the man who brought back the show is an atheist. And, the most brilliant showrunner who replaced him, Stephen Moffett decries “the spiritual”. So, there is never a reference or a reverence in the show for God. The doctor is a Time Lord, bouncing around the universe in his TARDIS through space and time. But, what is amazing to us is that in spite of the writers of this show having disdain for God, the show is incredibly spiritual. Why? Because, without ever uttering the word, the Doctor is a savior. He saves mankind over and over and over. He values the triumphant power of love. He hates evil.

I find it fascinating that the writers, many of whom are atheists or agnostics, return time and time again to this theme of a savior. It is as if they cannot ever walk away from it. Every good story involves a savior. Every thought involves a transcendent power that rescues us from death and despair. And here is the truth: we cannot get away from the utter and complete realization that we MUST have a savior. No matter how hard the writers struggle to eliminate the divine, they keep showing us our need for a savior! Ah, there is that verse again: “God has put eternity in the hearts of all men.”

Go watch the new version of Doctor Who. You will experience moments of nihilism as the writers insert their worldview. But, watch as inevitably, the darkness gives way to light and the Doctor saves the world again and again. Even in our stark, nihilistic race away from God, we cannot escape the need for a Savior. In fact we RUN to Him!

Now, here are some pictures of our little party. Try your best to erase the image of the fat fourth doctor from you mind before the dawning of a new year! But, we enjoyed eating fish fingers and custard (the fingers were, in reality cookies); jammy dodgers; little Adipose babies; fried bowtie pasta (because as we learned last night AGAIN: bowties are cool!); and finally cookies decorated with little TARDIS images.And, so, a new annual tradition is born and we look forward to next year’s Doctor Who Christmas Party. As Clara would say, “Run, clever boy, run. And, remember!” 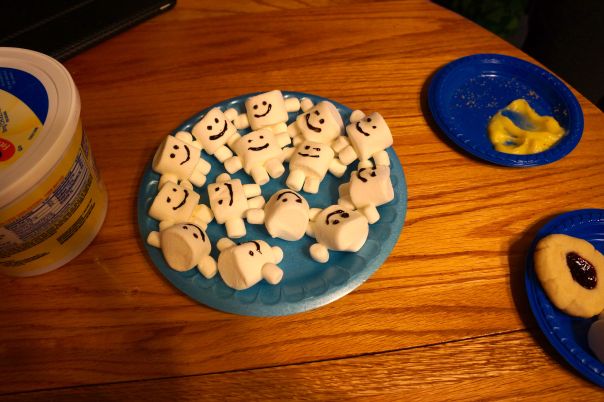 So cute you could eat them! Adipose Babies!

The deadliest weapon of all against a Dalek — Jammie Dodgers!

Always bring a banana to a party!

Sean and Jennifer try out their sonic screwdrivers. Yes, he was the Lodger! 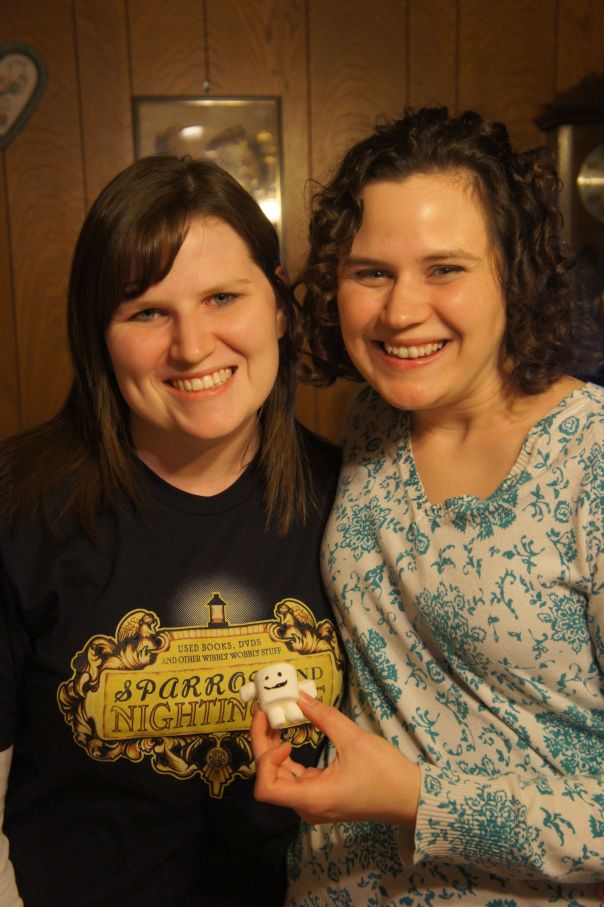