← A Thank You Note for our Veterans
The 11th Demon Draws Nigh! →

The tree was over twenty feet tall but it had the perfect top. I was freezing and a light drizzle made the ground slippery. Soon, the drizzle would begin to freeze and my family would find itself isolated in the countryside by a two week ice storm. Living in the country, our water came from a well and any interruption in electricity deprived us of water. But, I wasn’t considering this coming ice storm. I was only concerned about our Christmas tree. 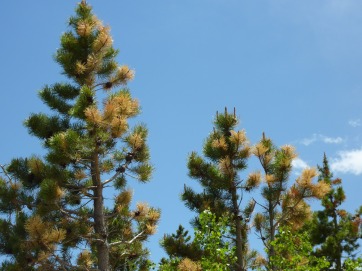 It was December, 1966 and I was eleven years old. I was halfway through my sixth grade year and already, I had grown three inches since the summer. Changes were happening to me that in time I would learn were due to this weird thing called puberty. And, perhaps it was my surging testosterone that allowed me to climb a slippery, icy tree in the cold winds of December.

My father worked for the Post Office. Long before UPS and FEDEX, the post office was the only way to ship packages at Christmas. My father dreaded this time of year. Beginning in early November, he knew he would be swamped at his job. Extra hours were added to his work schedule. He would leave before 5 AM and not return before 6 PM through most of the month of November and December. Each year, my father and I would go out into the vast wooded area of our 62 acres of pasture and forest and choose a tree for Christmas. The only kind of tree we had to choose from were long needle pine trees. They were never as shapely as a spruce or fir, but they were fragrant and fresh. And, being the poor folk we were, we couldn’t afford money for a fancy real tree.

But, this year was different. My father had taken on an extra late shift and would be working until midnight for the first two weeks of December. I had the choice of waiting until the end of December to go with my father and cut down the tree, or I could do it myself. I was eleven now. I was growing into a young man, as my mother was fond of telling people. Bolstered by her comments, I was determined to prove myself.

And so, I set out on this dreary gray Friday afternoon looking for the perfect Christmas tree. And there it was before me. Problem was, it was the TOP of a tree! No problem. I loved to climb trees. I would just shimmy up the tree and cut out the top. I had my father’s bow saw looped over my shoulder and my fake leather gloves on over my corduroy coat. I started up the tree and was a bit shocked at the slippery limbs. Was that ice forming on the ends of the pine needles? I hoped so. That might mean we would finally have a White Christmas!

I longed for snow at Christmas all my life. I recall one very cold night after watching White Christmas on our new color TV. I was about 9 and I went to the back door of our house. High up in the eaves, my father had mounted a spotlight to illuminate the back yard. I turned it on and leaned out the back door. I craned my neck to look up at that light and waited for snow flakes to drift down around it. It was only days before Christmas. I knew if I longed for it hard enough; if I willed it to happen snow would fall. But, the skies were as clear as could be with a million glistening stars against the black velvet of a countyside night. No snow. I stood there until I had a crick in my neck and my nose was numb from the cold before giving up and going back into the house.

Now, as I climbed that tree, I said a silent prayer for snow. It would be answered all right. Two weeks of snow and ice and frigid, frozen weather that would close the schools and make our coming Christmas possibly cold and without electricity.

I picked the level that would become the base of the Christmas tree and started sawing away. My hands were already numb from the cold but I soon warmed up as I drew the sharp toothed saw through the soft flesh of the pine tree. The smell of resin engulfed me.

I felt the limb I was sitting on shift and a sudden wind saved my life. I slid to the side just as the tree top above me snapped along the line of my saw cut. The top of the tree toppled to the side and then kicked back with the sharp edged rim of the saw cut. If I had not slid sideways, the bottom of that toppling tree would have decapitated me. The tree top finally snapped away, the rest of the uncut flesh ripping away. The tree top slid through the limbs beneath me and I fell off the limb.

I clawed at the trunk and the limbs as I slid downward but the now icy bark refused to give my hands purchased. I finally wedged between two of the bottom large limbs and came to a painful halt. The bow saw tumbled down from above me and barely missed my head. I sat there gasping for breath and began to shake. I could have been killed! What was I doing? Risking my life for a Christmas tree?

The feeling of fear and panic began to subside and I felt something new, something fresh. My heart was thumping and my breath was erratic but I had accomplished something on my own. It had turned into something dangerous and I suddenly realized that making decisions on my own would be a risky business. This is what it meant to be grown up; to find yourself faced with a lonely decision and then having to face the consequences. Learn from this, I told myself. Don’t ever cut the top of a tree off by yourself. I slowly descended the rest of that pine tree. I found the saw and cut away the ragged bottom of the tree top. By now, night had fallen and the ground was icy as I dragged the tree back across the pasture toward my house.

It seemed like forever by the time I pulled the tree across the pasture to the back of my house. I left it there and stumbled inside to warmth and the smell of fried chicken and mashed potatoes and the warm smile of mother. My father sat at the kitchen table. I was shocked. They had let everyone come home early on this Friday. I told them I had cut down the Christmas tree on my own and the look on my father’s face was priceless. His mouth fell open and he couldn’t believe it. My mother hugged me and was proud.

Until we saw the tree the next morning in the light of a gray dawn. It was lopsided and crooked and ugly. I was disappointed but my father clapped me on the back.

“We’ll make it work, son. It will be beautiful.”

That’s me standing next to the ugliest tree we had ever seen for our Christmas. In the following days of darkness and cold without electricity, the fragrance of that tree lifted our feelings. It promised coming days of life and light and the joy of Christmas. The electricity returned in time for Christmas Eve but we didn’t go back to school for three more weeks due to a flu outbreak. But, that tree was very special to me. I would lean over and look up through the branches of that tree at the gleaming lights and the shining ornaments and the glistening tinsel and I was once again above the ground suspended above the world; just me and my tree.

Years later, this incident would be the inspiration for that scene in the play, “The Night Gift” I mentioned in my last post. Eventually, I took that scene and wrote an entire play around it, “The Homecoming Tree”. 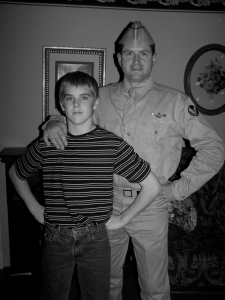 It is the story of a young boy who has lost his father to the attack on Pearl Harbor. He must cut down the family Christmas tree alone so he can become the man of the house. The story revolved around my parent’s experiences at the beginning of World War II. I have rewritten the play and I am working on a novelization of the work. One day, I hope to see it on the big screen — it would make a killer Christmas movie! And, I hope in 2014 I can find someone, someplace, some theatrical team willing to perform my newest version of this play. We’ll see. Until then, enjoy your Christmas tree this year. But be careful if you try to cut it down yourself!

← A Thank You Note for our Veterans
The 11th Demon Draws Nigh! →
Loading Comments...