← Why I Write
Why Do I Write About Demons? →

Why I am a Doctor

Her name is not important but I will call her Sophie. Sophie’s skin was thin, translucent like fine white porcelain. Her eyes were teal blue and larger than life. At the age of seven, Sophie had become quite ill with fever and cough that left her listless and lifeless. Even though I was an intern in internal medicine at the time, I was called upon to speak to Sophie’s parents. Sophie had a very adult illness. She had leukemia.

I sat down with Sophie’s parents and laid out the grim prognosis for their child. We could certainly begin chemotherapy at our university hospital, but eventually Sophie would have to be transferred to a much more specialized hospital. I will never forget the look of utter horror on her parents’ faces as they gripped each others hands and tears rolled down their cheeks. The mother swallowed and said, “We will take Sophie home. If we have enough faith, God will heal her.”

I had never faced this dilemma in my budding medical career. What was I to say? After all, I was a Christian and I knew that God could heal. But, really? If Sophie didn’t get chemotherapy soon, she would die within weeks. So, I said a silent prayer for words of wisdom and gentleness. And, like a flash, God revealed to me the answer I should give them. I asked a simple question.

“Did you pray for God to heal your child?” Of course they answered in the affirmative. And then, I told them more of my Story.

It was early February of my senior year in high school. I was depressed and confused. Did I really want to go to Northwestern University? So far away from my home town! But, I had to do something. I was determined to go to college and be the first of my family to get a college degree. I walked into the auditorium of Blanchard Baptist Church with some reluctance. Our pastor was a dour, bitter man whose sermons were always so esoteric and lofty, the average rural minded citizen of Blanchard had no idea what he was preaching on. But, our pastor had every reason to be bitter. His wife was essentially homebound with severe arthritis and they had adopted two children from a relative. Those two children were mentally challenged and the man had his hands full just trying to get through the day. It is a testimony to the compassion of his congregation that the church kept him on in spite of his difficulty being an effective pastor. Within a year, I would be the unwitting catalyst of a huge change in this man’s demeanor and God would grow him into one of the kindest and most effective pastors the church would ever have. But, that is another story for another day.

On this day, he spoke on purpose. Decades before Rick Warren crystalized these thoughts in his bestselling book, “The Purpose Driven Life”, Brother Mears laid our a simple but compelling message. He claimed that we were all called to a purpose in life. Yes, ordinary individuals were called by God to fulfill a purpose. Not just pastors and missionaries were called by God which was my prevailing attitude. No, he said, God called some of us to be school teachers, stay at home mothers, ditch diggers, you name it. The important thing is to seek God’s purpose for our lives and in finding that purpose, God would give us the desires of our hearts and a life filled with contentment and joy.

In my confused and depressed state, this sermon was just what I needed to hear. Did I have a unique purpose in God’s plan? This moment of revelation would be repeated over and over in my life. I would learn the hard way that my tendency was to come up with a plan then hold it up to God and say, “Hey, God, look what I can do for you! So, go ahead and bless it. Aren’t you glad I’m on your side! What a wonderful servant you have in me. So, let’s get to work with MY plan!” Whereupon, I would end up depressed, confused, and often, flat on my face in failure. I wish I had learned from this early experience in life, but such is the frailty of human memory. We are doomed to repeat our mistakes until wisdom kicks in and we truly learn from our mistakes and we change.

As our pastor called for a time of prayer and commitment, I bowed my head and prayed silently. It was a simple prayer. “God, I’m so sorry I haven’t asked this of you before now. I hope it’s not too late for me. Just show me what you want me to do with my life.” And like the captions in the old Batman television show — WHAM! BAM! POW! — God spoke in my mind, “Bruce, I want you to be a doctor.”

What? Wait a minute! I did NOT want to be a doctor. My best friend, Phillip had tried and tried to talk me into being a doctor. I had even accompanied him on some interviews for something called the “six year” program which I didn’t really understand because I didn’t care! Being a doctor was at the bottom of my list. In fact, it wasn’t even on MY list! But, turns out it was the only entry on God’s list. And here is the most amazing thing. With that realization that God wanted me to be a doctor came the most incredible acceptance and peace about it. Suddenly, knowing what I was meant to do with my life gave me joy, purpose, contentment. Wow! My life changed in a heartbeat!

The following weeks were a mixed bag of reactions to this event. My parents were totally against it. Two reasons: the money involved which my parents did NOT have and the fact that my life would never be my own. With call and demands on my time as a doctor, I would never get the opportunity to write much less have time for a family. But, I did not let this deter me. When I told my counselor at school, she laughed at me. Northwestern was NOT a prep college for medical school. I shrugged and made a statement out of nowhere, “I’m going to be accepted for the six year program. That way, I’m guaranteed admittance to college AND medical school. Problem solved!” I don’t know if she thought I was delusional or inspired. I didn’t care. If God wanted me to be a doctor, then I would be accepted in the six year program.

The next day, I received my letter. I was in. Not only that, but my best friend Phillip was in the program, too. This was unheard of! Only ten people were chosen from thousands of applicants from all over the United States. The idea that two of us from the same high school would be accepted was, well, miraculous! Get the picture! I had NOTHING to do with getting into that program. God deemed it and it was so. This was the first and most powerful lesson I would learn in life. God is in control. No matter how abysmal things may seem; no matter how depressed or confused I might become; no matter how dark the clouds that gather around me; God is always in control.

There is much more to this story of how things worked out to pay my way through college and medical school and an unforeseen scholarship that allowed me to buy a car. And, the list goes on and on.

So, here I sat before Sophie’s parents. I told them my story and I reached out and touched her mother’s hand. “You see, if you prayed for God to heal your daughter, God reached back through time and touched the heart and mind of this humble physician and called me to be an instrument of healing. You see, I may be the answer to your prayer. God works through people an I am sitting here as an instrument of healing for your daughter. There is no need to take your daughter home and wait for God to work. He is working now, here, through me. Let me give your daughter the treatment she needs.” 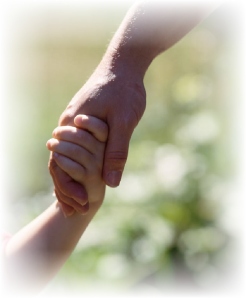 Nice story, Bruce, but what about your dream of being an author? Through those dark, trying years in medical school, writing was my salvation. I kept notebooks of poems and essays; pouring out my pain and fears onto the page; literally bleeding all over the paper. Writing became my way to communicate with God all the conflicting thoughts and feelings as I struggled through medical school and, once again, sought God’s purpose for my direction in medicine. None of those writings were published. Not yet, anyway. But, I look back on them now and they are a time capsule of my suffering and doubts and how God took me by the hand and led me through them. They are a reminder once again, that God is in control.

As the years have passed, there have been many, many Sophie’s in my life. I can’t count all of the times someone has asked me if I am a believer before I put my hands on them and bring God’s healing to their lives. I can’t count the number of times I have stopped in the middle of a difficult and trying procedure when a patient’s life was in my hands and backed away to say a humble prayer for help once again realizing from Whom my strength and calling comes. Why am I a doctor? Because God deemed it.

Sophie went on to that specialized clinic and her leukemia went into remission. I do not know what her eventual fate was. I will never know this side of heaven. But, I do know that in the grand scheme of the universe and the unfolding Story that God is weaving around us, when we put our lives, our future, our ambitions, our plans in His hands, He will lead us and give us a peace that surpasses all human understanding.

Now, the question arises, did I ever get to write again? Well, yes in a most surprising and totally unforeseen way, I did. More on that later. For now, seek God’s purpose for your life. It may be simple. It may seem too much of a challenge for you to face. But, if it is God’s plan, then God will prepare the way for you. And, on the other side of that valley of the shadow of death and confusion and uncertainty lies joy, peace, and contentment.

Want to know where I got the idea for my demon hunter, Jonathan Steel? It began with an incident during my internship and I will soon tell you all about it. For now, if you are interested in finding out more about the Chronicles of Jonathan Steel, check out the BOOK tab and ORDER tab on this site or go to this link.

Also, tonight from 5 PM CDT to 7 PM CDT I will be giving a live interview on blogtalk radio. Go to this link to find out how to listen live.

Posted on April 29, 2014, in Breaking News, My Writing, Speculative Fiction and tagged calling, Destiny, Doctor, Faith, God is in control, healing, prayer, purpose. Bookmark the permalink. Comments Off on Why I am a Doctor.

← Why I Write
Why Do I Write About Demons? →