← Why Do I Write About Demons?
Can Fiction be Christian? →

My friend Mike Licona contacted me to meet him Abilene, Texas to interview a man who came back from the dead. How could you resist such an offer? At the time, Mike was head of the Apologetics division of the North American Mission Board of the Southern Baptist Convention. Man, was that mouth full! He had received word of a man whose near death experience was so fascinating, he couldn’t resist interviewing him. He wanted me to come and review the man’s medical records to see if there was a medical reason for his out of body experience. 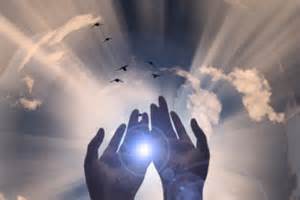 I arrived on a cold December morning and put the address in my iPhone. Soon, I pulled up in front of a flat building with the title, “Love and Care Ministries”. I soon met a man I can only call Julio and learned that due to a nondisclosure agreement we could not share his story. Mike and I interviewed Julio anyway and his story was truly amazing. I had studied everything I could find on near death experiences from an objective and scientific point of view and Julio’s was a classic case of NDE. In fact, a scientist had developed a grading scale on elements of NDE and Julio’s story fulfilled almost all of the minimal elements. Later, the director of the ministry informed me that Julio had told that story over and over for years and the details had never changed. When one fabricates a story, one cannot help but embellish and add to it over time. Julio’s consistency smacked of authenticity.

Later that evening, we had dinner at a local Mexican restaurant. Julio had never met  me, you must understand. He had never heard of me before I walked into the ministry offices that morning. He sat across from me at the table and paused and glanced over my shoulder. His intense gaze then fell on me.

“I’m finishing up a manuscript for publication in October. It’s called ‘The 13th Demon: Altar of the Spiral Eye’. How did you know?”

He smiled. “Dad told me. That explains the two guardian angels behind you.”

I actually looked over my shoulders. Guardian angels? Really?

Let me stop for a moment. Would you believe this guy? Would you put stock in anything someone said who claimed to have come back from the dead? Who claimed to have seen Jesus and heaven and angels and even Satan himself? I am a physician. I am trained to recognize abnormal psychiatric behavior. You read my last post, right? I was extremely skeptical of this man’s claims. Until now. there were many such small moments but the man knew things that were impossible to know. Not just about me, but about Mike whom he had never met. The next day, Mike and I went with Julio and two men from Love and Care Ministries to give out hot lunches to the homeless. We met dozens of helpless, hopeless men and women throughout the city. And, in every encounter, I watched Julio reach out and touch and hug and pray for these people. His love was genuine. He was NOT psychotic. I did not sense any evil from this man as I had from that demon possessed girl way long ago or in the several encounters with evil I had experienced since that time. Julio was the real thing!

Julio told me something else that night. “You have two guardian angels. Dad wants me to tell you not to get discouraged. The enemy will try many times to stop you from writing your books about these demons. (How did he know I was planning more than one book?) You must not let the evil one stop you!”

I am now on book number four, “The 10th Demon: Children of the Bloodstone”. My latest book in the Chronicles of Jonathan Steel is out. Don’t get confused now. I’m counting down from 13 to 1. “The 11th Demon: The Ark of Chaos” was partly inspired by Julio’s remarks. In the time since 2010, there have been many attempts by “the enemy” to stop my books. The evil forces around me haven’t pulled any punches. But, for every obstacle; every speed bump God intervened in some “mysterious” way to keep me on track. And, part of His plan was and is guardian angels. 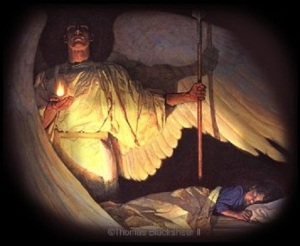 This painting by Blackshear hangs in my bedroom.

In “The 11th Demon” I explore the idea that perhaps God has sent an angel to watch over us and to handle the messages God would send to us. Don’t get me wrong. We are not to worship angels. The scriptures are explicit on this issue. In today’s culture, we tend to elevate angels to some god like status. In fact, they are created creatures like us who serve to carry out God’s work. They do have free will. If not, then the most beautiful of God’s angels, Satan, would never have chosen to rebel against God. In fact, in “The 11th Demon” I go into the mind of a fallen angel to propose what it may be like to have rebelled against God and to have lost all of eternity.

Pick up a copy of “The 11th Demon: The Ark of Chaos” and read about guardian angels. Tell me what you think? Have you ever been visited by a guardian angel?

For more information on my books, the Chronicles of Jonathan Steel, go to the ORDER tab on this site or visit this link to order all or any of the three books.

Posted on May 7, 2014, in Breaking News, My Writing, Speculative Fiction and tagged demons, fall from heaven, guardian angels, heaven, Near Death Experience, Satan. Bookmark the permalink. Comments Off on Why I Wrote “The 11th Demon”.

← Why Do I Write About Demons?
Can Fiction be Christian? →