← Death By Darwin Release is coming soon!
Hope Again, our book on depression, 99 cents on Kindle1 →

A Day That Will Live In Infamy

I just ordered my proof copy of “Death By Darwin”. Soon, you will be able to get your hands on my next book. By December 15th, the ebook will be available and hopefully, the printed version. More on that soon. 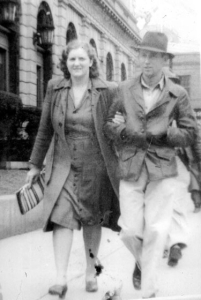 My mother and father in downtown Shreveport during World War II

But, today, I want to focus on what took place on this day 75 years ago. Yes, December 7 1941 is a day that will live in “infamy”. In 2005 our drama group at Brookwood Baptist Church performed my last written play, “The Homecoming Tree”. The play was set in the days between Thanksgiving and Christmas 1941. I based the story on my parents’ experiences living in Shreveport, Louisiana during World War II. The play has a very special place in my heart and I have rewritten it over the past 11 years. I am now working on the conversion of the play to a novel.

My hopes are to see the play performed again in its new form and also to possibly add musical numbers to the play. But, for now, I am settling for finishing up the novel. Today, in the honor of the attack on Pearl Harbor and the brave men and women who died that day and the Generation that took upon themselves to defeat the greatest evil in modern history I want to post an excerpt from my upcoming book, “The Homecoming Tree”.

To give you some idea of the setting, Ray Thorn is working with the elderly CEO of his company, Frank Collinsworth. Ray’s idea of getting ahead in business is devious, unethical, and wildly successful so much so, he has lost his way with his family and his life. In a set of circumstances you will have to wait and learn from the book, he finds himself back in 1941 with no memory of his true identity. In this scene, the father of the elderly Daniel Collinsworth, Ray’s future CEO, is Frank Collinsworth who has been sent on a “secret mission”. His wife has just received the first letter from her husband on December 7, 1941. Esau Cheatwood is a local business man determined to profit from America’s entry into the war and is an uneasy reminder to Ray that his true nature is similar to Cheatwood’s. Daniel, now only 13, listens intently as his mother, Ann Lee reads the letter from his father.

Ann Lee’s smile widened as she read the letter. “The days are warm and breezy and the landscape is beautiful. I can imagine one of the red flowers of the hibiscus in your lustrous hair.” She grew quiet and a red blush came over her face. “Oh, my, I’ll leave the rest of that paragraph for later. Ahem! Tell Daniel that I’m getting to fly some really big airplanes. I’m not only training but I’m learning here at–” She squinted and showed the letter to Ray. “They blacked out the name.”
Ray nodded. “Secret mission, remember?”
Ann Lee nodded. “Of course.” She continued to read. “I’m planning on being home Christmas Eve so look for me. I’ll be bringing you all very special gifts.”
Ophelia stood up abruptly and her hand went to her mouth. “Uh, Sister, did you hear what they just said on the radio?”
Lonnie glanced at her. “Sister, don’t interrupt.”
Theophila stood up also. “But, listen. Something has happened with the Japanese.”
Ray’s heart skipped a beat and his hands grew clammy and cold. It was happening. Whatever the horrible, terrible thing was that he could not remember had happened. He knew it in every fiber of his being and nothing would ever be the same again. Evelia turned the volume on the radio as high as it would go.
“Forces of Imperial Japan have reportedly attacked Pearl Harbor in the American territory of Japan. Reports are scant and incomplete but it appears the entire fleet in Pearl Harbor has been disabled. At dawn this morning, Hawaiian time, a squadron of Japanese airplanes carrying bombs attacked the American fleet in Pearl Harbor. We will bring you more news as soon as it is available. President Roosevelt has recalled his cabinet to the White House.” The tinny voice of the announcer echoed through the suddenly silent house.
Ann Lee dropped the letter and her hands flew to her mouth. “That’s where Frank is. Pearl Harbor!”
Esau Cheatwood jumped up into the air and whistled. “That’s it! We’re in the war, now, son.” He whirled and hugged his son. “We’re going to make a fortune!”
Ann Lee put her hands to her mouth and stumbled. Ray caught her and lowered her to the couch.
“Ann Lee, just remain calm.” Ray soothed her. His heart was racing and his mouth was dry and papery. Lonnie’s face was as red as a beet. Sue Carol was sobbing in Lonnie’s arms. The two boys, Daniel and Buster were just standing there looking confused and lost. Little Lonnie kicked over his Lincoln logs again and sat down to rebuild them for the second time in the last hour. The three sisters were hugging each other, their powdery white faces riveted on the radio. Uncle Lawson’s gaze was far away and Aunt Wimpy slowly came over to him and put her arms around him. He stood like a statue. Peggy Lou was whimpering and turning slowly in circles like a puppy lost in the storm. Esau was beaming and pounding his son on the back.
“We’re in the war, now. We’re going to kick their tails all the way to China! And,” He paused as Ray glared at him. “What’s eating you, Thorn?”
“Ann Lee’s husband is at Pearl Harbor, Cheatwood.”
Esau shrugged. “Nothing we can do about that now, is there?”
Something hot and fluid flowed through Ray’s mind and he jumped over the couch catching Esau around the waist. They rolled across the floor into the dining room table. The dishes clattered and Ray felt the hot gravy from the roast beef splash across his back. But, he didn’t care. He wanted to pound Esau’s face into the pavement. The two of them rolled and tussled across the floor until the coat rack fell on top of them.
Ray wrestled with Peggy Lou’s coat and threw it off of him as he slammed his fist into Esau’s face. Esau squealed like a pig and put his hands across his mouth.
“Stop! Stop it, you maniac!”
But, Ray felt the anger and the frustration build. This was bad. This was horrible. This was a defining moment in history and this man had laughed and celebrated while thousands had died in Pearl Harbor. Strangely, he realized he had never cared about this before. He paused with his fist raised as the strange thought brought his beating to a halt. Before? He had known about this before? How could he? It just happened.
A shadow fell over him and he looked up at Lazarus Cheatwood just as he brought the roast beef dish down on his head. The dish shattered and roast beef and onions rained down on them. He fell back into growing darkness and pain.

Ray moved in and out of consciousness, light and shadows, silence and sound.
“Flash, Washington. The President announces Japanese attack on Pearl Harbor.” He heard the Voice speaking from a great distance.
“Let me repeat this urgent news flash. The White House and the Navy Department report an attack by Japanese air forces on our naval base at Pearl Harbor, on the island of Oahu in the Hawaiian Island chain. We are trying to get all the details we can, ladies and gentlemen. We take you now to our foreign correspondent in Honolulu, Hawaii, Martin Worth. Come in, Honolulu.”
Silence settled around Ray. He was sinking deeper.
“Come in, Honolulu.” More silence.
“Come in, Honolulu.”
“Yesterday, December 7th, 1941, a day that will live in infamy,” A different voice now. One from the past. But, how could that be? It was in the present. Wasn’t that President Roosevelt? Darkness swam into cloudy light and an old man lay next to him on a couch. Blood trickled from a wound on the old man’s temple. His pale blue eyes were opened and he stared off into space. It was as if the old man was talking in his sleep. Who was he? Why did he have a wound on his temple? Where was Mikey when you needed him? Mikey? Who was Mikey? Hadn’t he stopped the mugger? But not before the man had hit–. Ray swam in clouds of confusion as the old man continued to talk.
“The surprise attack on Pearl Harbor was complete. The surprise attack came in two waves. The first hit its target at 7:53 Hawaii time, the second at 8:55. By 9:55, it was all over. Behind them, they left chaos: 2403 dead, 188 destroyed planes and a crippled Pacific fleet that included 8 damaged and destroyed battleships. It is rumored that a Japanese commander made the statement ‘I fear all we have done is awakened a sleeping giant.’ My family listened to the reports of the attack on Pearl Harbor on the radio. We saw the news footage at the newsreels at the movie theater. I imagined my Daddy as one of the brave pilots who actually made it into the air to attack the enemy. But, the truth was he was probably on the ground at Hickman Field and never made it into the air. In the days to come, we would wait anxiously for news from my father. But in the confusion and chaos after Pearl Harbor the government was more concerned about entering the war against Japan and Germany. They didn’t have time to track down one missing soldier. With only days left until Christmas, my mother, sister and I cared nothing about putting up Christmas decorations. We just wanted my Daddy to come home.”
Ray saw smoke billow, flames consume shattered airplanes, wings and fuselages moving through the bright sky with the red dot of the rising sun. The world shuddered and contracted around him as evil and death warred for supremacy in his life and in the world. The image of a woman with blonde hair floated in front of his eyes. She reminded him of Peggy Lou but she wasn’t quite the same woman. A young boy with dark hair ran across his vision chasing a small dog. The same old man who had been speaking floated across his mind. His face was swollen and bruised and blood trickled from his mouth. He was dying. They were all dying. The world was dying, drowning beneath a flood of blood. Ray swallowed and tried to cry out in horror.
“No! Don’t let it be so! Stop it! God, stop it!” He pleaded but the world continued to swirl around him nonstop. The old man’s eyes opened and he mouthed something Ray could not hear. Then, his features changed and smoothed and became the face of a young man.
“Gee, Mr. Thorn, we thought you were a goner.” Daniel Collinsworth said.

← Death By Darwin Release is coming soon!
Hope Again, our book on depression, 99 cents on Kindle1 →