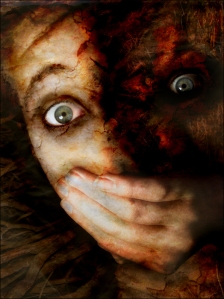 I often get asked if I believe demons are real.

I was an intern just seven months after my graduation from medical school rotating through the emergency room. It was a cold February night and a raging icestorm had transformed Shreveport, Louisiana into a crystalline wonderland. Unless you were driving in the stuff or if you were homeless. Dozens of people were crowded into the emergency room waiting room trying to stay warm. The ER was divided into the surgical side and the medical side. If you were a victim of the “knife and gun club” you came to the surgical side. If you could walk through the door under your own power, you came to the “Walk In Clinic”. This is where I found myself on that cold, frigid morning.

“Groundhog, it’s your turn to see the next psych patient.” One of my team members informed me. I never figured out why my nickname was Groundhog, but it was appropriate given it was Groundhog day, albeit only 2 A.M. I reluctantly got out of my chair and headed to the far hallway where we kept the crazies. My job was simple. Evaluate the patient to make sure the “psychotic” behavior wasn’t induced by a medical condition and if not, then call the psychiatry resident to come and admit the patient to the psych ward.

I should have known something was up the minute I rounded the corner of the coldest hallway in the winter. Two policeman were leaning against the wall and neither one would meet my gaze. In fact, they were nervous, if not downright frightened. I looked down the hallway toward the examining room and noticed a sheen of water on the floor. The fluorescent light fixtures had been broken and shattered tubes hung from exposed wires sometimes sparking as I made my way through the inch deep water toward the examining room.

The door to the room was ajar and when I stepped it, I was met by chaos. The sink had been partially ripped from the wall and water was gushing onto the floor. The mirror had been shattered into a million pieces and mirrored glass covered everything. Something sharp had ripped open the cover to the examining table and its stuffing filled the air with particles. Our “Wood’s” light, a black light used in the diagnosis of skin fungus, hung by a wire and the black light made the gases from the broken fluorescent light bulbs glow with an unearthly purplish hue. And, there wasn’t a patient in sight. However, from behind the examining table in the back corner I head a raspy, deep throated breathing.

It was a rapid breathing, a guttural exhalation and inhalation like some rabid beast was waiting to rip out my throat. Slowly, I stepped around the end of the table. Crouched in the far corner was a tiny African American girl probably in her early twenties buck naked with her back to me. Her rib cage was retracting with each beastly breath.

“Ma’am, I am Dr. Hennigan. How can I help you today?” I said with trembling lips. My heart was racing and my mouth was dry. 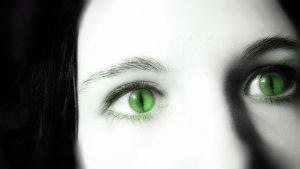 She spun around quickly and with a twisted, feral look on her face hissed at me and shoved her clawed hands at my face. I will never forget the sound of her deep voice or the look of absolute madness in her eyes. But, more than anything, I will always remember the unmistakable sense of evil that emanated from this tiny girl.

I stumbled my way out of the room and fell in the cold water. The policemen came and dragged me from the hallway. With shaking hands, I dialed the psychiatry resident and informed him of his new patient. “You might want to pick up a priest on your way down.” Was the last thing I told him.

Later on, I learned the girl had no drugs in her system and once she reached the psychiatry floor, she calmed down but continued to exhibit bizarre behavior. She did not fit any prescribed psychiatric profile and I never found out what happened to her.

Since that time, I have learned to listen to the still, small voice within me that groans and moans in the presence of evil. I believe it to be the Holy Spirit. There have not been that many incidents in my life like the one above. But, they have happened and I am convinced beyond any shadow of a doubt that evil is real and I have dwelt for a moment in its presence. 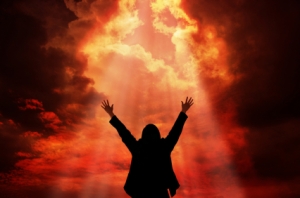 Do I believe demons are real? You bet you, I do. I have met them. I have faced them and run away. I have struggled in the presence of their evil auras and I have fought them away with prayers and scripture. This is why I write about demons and angels. We must understand who are enemy is. We must be aware of the war that is raging around us for our very souls. To deny evil is real; to ignore the existence of the Enemy’s soldiers is to have already surrendered the world to the forces of evil. The question is: Do You Dare Look Evil in the Eye? 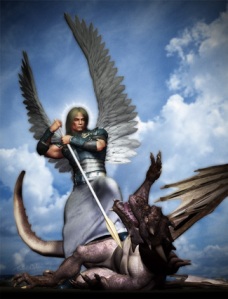 The fight goes on. Whose side are you on?

Don’t forget I will be in Austin at LifeWay Christian Book Stores this Saturday, October 22, 2011 from 1 to 3 P.M. and here is a flyer with the information:

← Book Signing this Weekend in Austin!
A Book Review Day 1 — The Bone House by Stephen R. Lawhead →
%d bloggers like this: