New Zealand — This Past Saturday and Sunday

Sunday and Monday in New Zealand saw our intrepid travelers leaving the fair city of Napier and journeying southward to Palmerston North. There we spent the night after visiting with Alex and Grant’s oldest son, Sam. Monday morning we headed into the winding hills and mountains of the southern part of the North Island toward Wellington.

Wellington resides on the sea with a large harbor. We will boarding a ferry in the morning for a three hour journey across the sea to the south island. Pictures below are from Saturday and Sunday in Napier and Monday in Wellington.

Napier is a beautiful and quaint town as I mentioned in my previous posts. We drove southeastward to Te Mata, a large mountain overlooking Hawke’s Bay. It was a beautiful sight as you will notice in the photographs below. We took some time to walk the streets of Napier, do some shopping at a market place and ended up at the beach. Then, we drove to the top of the “bluff” a precipitous cliff in Napier proper overlooking Napier’s harbor. That evening, we had a Kiwi barbecue with grilled chicken kabobs, steak, sausage, patties and “jacketed” potatoes and lovely desserts I mentioned earlier.

Sunday, we had the privilege to worship at Napier Baptist Church. I have met only a handful of New Zealand natives in Napier. But, when Sherry and I walked into the church, we felt instantly at home. When we were greeted by the members, it was like rekindling an old acquaintance. I had an opportunity to talk very briefly about my depression book and had several conversations with members of the church after the service during the “tea”. We sang several worship songs. Two young people were baptized and the pastor invited friends and family to come and stand around the baptistery during the ceremony. He also invited anyone who wanted to share a prayer, Bible verse, or a word of encouragement just before the actual baptism. It was stunningly moving and profoundly beautiful.

It seems the modernized world is now turning against Christianity. Even here in New Zealand, Grant tells me that persecution is beginning. We are already facing persecution in America and I would say the Christian’s greatest mission field IS America. We are called judgmental, intolerant, legalistic, hate mongers, and man other names I will not repeat in this blog. It is true that there are many who claim to be Christians whose behavior warrants such prejudice. But, true followers of Christ; true disciples of Christ are compelled by unconditional love, not hate. It is this love that pulled us into the church family instantly. In fact, I would say that a Christ follower could walk into any real, committed gathering of other believers (called a church) and feel the same kind of caring and acceptance we felt here in New Zealand. Wow! It was a balm to soothe my soul. It tells me that we must press on with our love and devotion to the Creator God of the universe who is also flesh and spirit among us. It tells me that we are more than a footnote in history; more than a cult of strange folk; more than a smokescreen for hateful fundamentalism. We are called Christian because we are like Christ!

On to Wellington. Just a few words about this city. It is much smaller than Auckland but a large city in its own right. It spreads out over lush, green hills overlooking the harbor with tight, narrow streets surrounded by tall modern buildings and preserved historical buildings. I fell in love with Wellington instantly. It reminded me of London while Auckland reminded me more of Paris. I would go back to London and Wellington in a heartbeat.

A small surprise was WETA, the special effects workshop for all of Peter Jackson’s films! I was so excited, but I was not allowed to take pictures in the actual workshop!

I am now sitting in my hotel room, tired, weak, hopefully coming out of this cold I’ve had for five days. I am praying for safe waters in the channel tomorrow as we journey to the south island. I am praying for a healthier tomorrow. More will come in the days ahead as we hit the South Island. We me a couple returning from the south island today and they told us to be prepared for “scenery overload”. Bring it on!

Below are pictures from Te Mata, the highest peak overlooking Hawke’s Bay and Napier. Followed by this are photos of Sherry at the beach. And Alex’s favorite flower. Finally, the sheep you see are right across the street from the Stitchbury house! 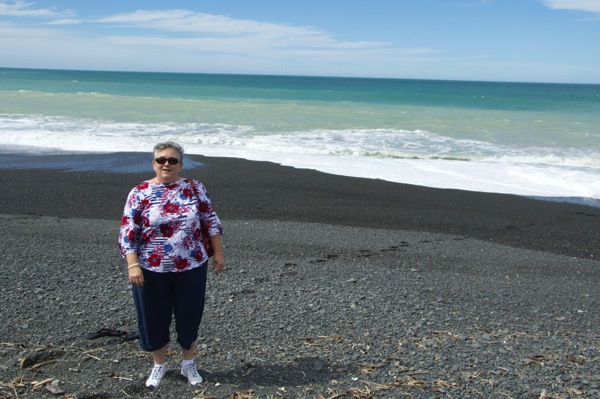 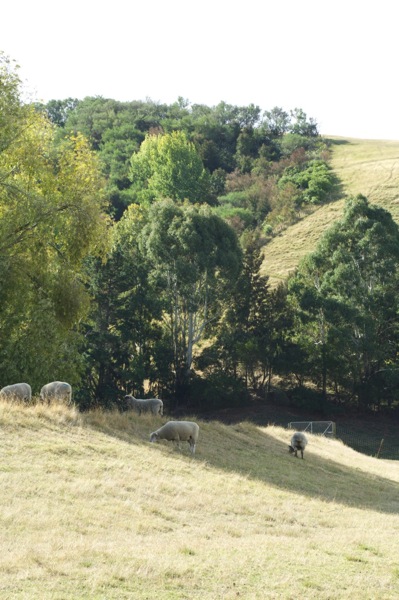 Posted on March 13, 2014, in Steel Chronicles and tagged Napier, New Zealand, WETA. Bookmark the permalink. Comments Off on New Zealand — This Past Saturday and Sunday.