That night in Nashville I desperately needed a hug from my wife but she was a three hour drive away visiting her friends in Chattanooga. I leaned against a tree in the darkened parking lot of Redeemer Church and watched people move inside the bright, clean interior of the church’s attached house. Most of them smiled and laughed as they exchanged brief touches and hugs. Somewhere in that brightness my son spoke with peers his own age. I, an aging gray haired fossil, made up only a small minority at the 2012 Hutchmoot.

I called my wife and listened to her joyful voice as she answered her cell phone. She was having the time of her life playing bridge with her friend Barbara. I was more depressed than I had been in months thanks to an email I had received that afternoon from my publisher “releasing” me from a five book contract after the second book would be released in less than a month. She tried to console me and offered her practical and sensible advice. Always practical and sensible. I, on the other hand, found myself living half the time in a dream world of hopes and aspirations that could never be totally realized. She reminded me that by October, I would have two fiction books in the marketplace released by a major publisher. And, I had just landed a contract for an update to a depression book my co-author and I wrote in 2001. I should have been able to throw all of that on the scales and realistically see that in spite of the release from one contract, another had taken its place and, in the balance of things, I was actually ahead of the game. With the offer to update our depression book had come the offer of writing an entire book series.

But, as much as I loved the idea of updating our depression book, I did not want to say goodbye to Jonathan Steel and his spiritual warfare against the forces of evil. I told my wife I loved her and wiped the tears from my face and tried to man up. I had to go back into the church and face that crowd of giddy millennials. I did and here is the beauty of this thing called Hutchmoot. 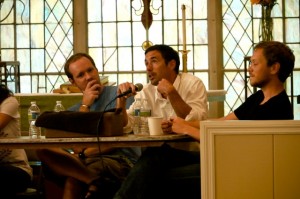 The people surrounding me totally understood my situation. Many of them had been in similar circumstances, their art rejected or their idea laughed at. Attendees at Hutchmoot are much, much more than artistic wannabes. I’ve met artistic wannabes.

Once, I attended a local “writer’s club” and was met at the door by an aging 1950’s glamour girl. She was obviously in her 70s but dressed like Kitty Carlisle (whose grandfather was once mayor of Shreveport!) with a flowing gauzy dress and matching long, wavy hair dyed a hideous blue black. Her face was caked in powder and her eyes were limpid. She greeted me with a dried lipstick smile and a cold, narrow handshake.

“Are you a published writer?” her first words.

“I’ve been published.” She smiled again and I watched bits of lipstick fall to the ground like dying flower petals. She held out to me a fading copy of LIFE magazine tucked into a cellophane wrapping — November, 1957 I think. Impressive. Most impressive. She tapped the magazine.

“Right here in this magazine I was published, my dear.”

I took the magazine and nodded looking beyond her willowy figure to the open door. I had to get passed her. Or did I really want to? Were all of the club members like her? “You wrote an article?” I smiled back at her.

“Letter to the Editor!” She clasped her hands and beamed at me.

I never met anyone like her at Hutchmoot. Everyone in attendance either created art or loved Christian art. No pretenses. Just a simple concept — community. Here at this gathering of like minded Christian artists spanning the range from music to writing to painting to catering, yes catering! Even the “celebrities” hosting this event exhibited humility and frank honesty and friendliness. Andrew Peterson, author of four fantasy books and countless wondrous albums would sit at the table with me and my son and just talk. No pretense. No celebrity snobbiness. No LIFE magazines!

Outside, beneath a tent, Eric Peters tried his best to hold an acoustic concert for about a dozen of us. However, his battle with depression, still being waged, would get the best of him and his face would darken with the shadows of that beast and he would halt — pause — emotion in his voice as he tried to explain that THIS song came out of his pain and agony.

You see, nowhere on the face of the planet would a total stranger get up from his seat, walk across the grass to a celebrity and reach out and hug him. Nowhere but Hutchmoot. I told Eric I understood. I have battled depression and most times won; I battle it still. So does he. But, there are times when the VOICES speak loud enough to command our attention and we turn away from the smiling, loving face of our Savior and gaze into the abyss. What keeps us from falling into that crafty chasm of the enemy are many but one saving grace is our community of family and friends who love Christ and each other no matter how many “releases” from contracts fill our lives.

Recently, God began working again around me. In spite of my many weaknesses and faults, God placed certain people in the line of my movement. And now, I may see the birth of something like Hutchmoot. I tried to get the Inkwell going in 2011 and only had one meeting with one person before it faded away. But, there is a growing community of Christian artists here in our area and perhaps it is time for us to meet. It is time for a community to form to encourage, to lift up, to hold accountable our creative acts inspired by Christ, to be there when we are reflected by tradition and to offer a simple hug.

If you are interested, let me know. Here is how you can get involved. First, there is a “meetup” called InkwellSBC (Inkwell Shreveport/Bossier City). You can go to that page and sign up and get involved. Or, you can check out my Facebook page here. Or, you can drop me an email through the contact tab on this website, but if you are interested, we need to KNOW soon. I have to schedule a night in the Well, the coffee shop, at Brookwood Baptist Church.

And, to entice you, I will offer something very special. At our first meeting, soon to be determined, I will review Andrew Peterson’s latest book, “The Warden and The Wolf King” and we will have a drawing to give away four copies of the book SIGNED by Andrew Peterson! Interested? Then, I gotta know. And, soon.

So, if you would like to be a part of a local Christian artistic community that meets on a regular basis, contact me. If we get enough interest, we’ll meet and four of you will walk away with signed copies of Andrew Peterson’s book!