Those who accept the authority of the Bible and embrace a Christian worldview take different positions on whether God might have created intelligent life on other planets. This question has been debated at least since Thomas Aquinas discussed it nine centuries ago.

Scholars who believe extraterrestrial intelligence (ETI) physically exists see it as a display of God’s creativity and power. They argue that a God who so obviously enjoys creating, a God of unimaginable power, should not be expected to limit His creative expression to just one planet and its one species of spiritual beings.

I was ecstatic when I heard the announcement way back in 1986 that Gene Roddenberry was bringing a brand new version of Star Trek back to television. Star Trek: The Next Generation promised to fulfill all of my nerdy science fiction dreams. Granted, the first season was rocky thanks to a writer’s strike. But, the following seasons were profound. And, the best cliffhanger of all times in television occurred at the end of the third season when Captain Picard appeared on the Enterprise view screen and said, “I am Locutus of Borg”. END_OF_DOCUMENT_TOKEN_TO_BE_REPLACED

While I am waiting for the availability of “The 11th Demon: The Ark of Chaos” around November 20th (I’ll give all of you a firm date once I find out) I thought I’d share something just for fun. In the past couple of months there has been rumors and suggestions for a new Star Trek television series. The movies have proven successful and now the writers of these two movies think it is time for a television show. Star Trek was made for episodic series. Only then can it deal with pithy and difficult social and humane issues as it did in the 1960’s. You can’t dig that deeply into a movie.

But, we can’t simply go back to the original world of Star Trek, can we? Now, we have two parallel time lines so what do we do? What and WHEN would be the focus of the next series? So, if you are a Trekker, then read on. If not, then come back soon for more information on my book.

So, here is an idea. It may already have been used in the spin off games, comic books, or novels but a suggestion:

It is the far future and the Borg eventually overran the Federation. All but a few worlds were assimilated. Quadrillions of sentient beings became Borg. Earth became an outlying Borg world with an underground rebellion preventing the planet from total conversion. With over 95% of the Federation worlds under Borg control, the Borg grew tired of the rebellion on Earth and withdrew from a devastated and depopulated Earth.

But, the Borg’s greatest strength proved to be their undoing. With so many minds now linked in the Borg collective, the Borg began to splinter. Twelve factions within the collective mind began to strive for dominance. Soon, these sub-consciousnesses drew apart and so began the Borg Civil War. Such battles and such clashes were unparalleled by any in the history of the galaxy. Great war machines were built that dwarfed entire solar systems. Energies were deployed that tore holes in the very fabric of space. Biological and genetic weapons decimated normal genomes and created horrific spawn of the Borg. Entire regions of the galaxy became uninhabitable filled with unspeakable pervasions of space time.

Eventually, two factions remained, the Red Borg and the Gray Borg. These two remaining collective “minds” could have recombined and saved the Borg, but soon the Gray Borg lost ground. In a final desperate move, the Gray Borg unleashed the ultimate doomsday device. Arcane energies rippled through the remaining Borg collective, reducing all living matter to goo and disintegrating every Borg circuit.

Silence fell across the known galaxy. Borg ships and war machines drifted in cold, harsh space and peace filled the devastated territory of the Alpha Quadrant.

On Earth, a remnant of Starfleet had been biding its time, rebuilding quietly within the very wreckage of the Borg machinery and the tortured Earth. Salvaging Federation starships and merging them with Borg technology, Starfleet’s weakening pulse grew stronger. Once the Borg mind fell silent and was no more, this ragtag group of sentient beings emerged from the shadows to rebuild the Federation.

And so, the new Federation of Planets was created built upon the ashes of the dead and decaying worlds of the Borg collective. It was time to rebuild civilization by reaching out to worlds once prosperous and powerful. It was time to boldly go into an unknown universe far more dangerous than ever before. What remnants of the Borg Civil War await our intrepid starships? What horrors born from the great war machines and biological weapons await discovery?

This could be the new Star Trek!

What do you think? Where would you like to see a new Star Trek television go? 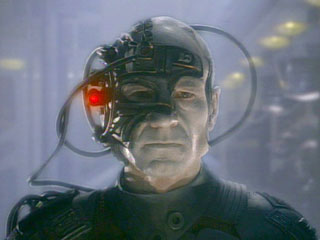 Courtesy of Paramount and Star Trek.

My Borg friends will understand this statement. If you are not familiar with the Borg and you are an aspiring or published author, you will probably recognize a better version of this statement: “Resistance is Inevitable!”

In February, I attended the Platform Conference featuring Michael Hyatt. I had the opportunity to sit at the table with Michael (yes, we are on first name basis — at least for my part!) and I had a follow up “coaching” session with Michael four weeks later. What I learned from that conference is priceless. Authors today MUST build their own platform as publishers no longer provide marketing and publicity for their authors. I am also now a member of Platform University and I strongly recommend Michael’s book, “Platform” and considering a membership in the university.

But, what I wanted to talk about in this post is Resistance. Michael devoted an entire hour to this topic and frankly, I didn’t want to hear it. Let’s just say I was resistant to the idea that my writing career meets resistance. That is a huge chunk of denial!

I would recommend buying the book and reading the entire section on Resistance but I’d like to hit a few highlights of how resistance presents itself in my writing:

There are two sources of resistance: external and internal. I have very little control on the external sources of resistance. These are often related to the changing world of publishing. But, these sources can also be very close to home: children, day jobs, aging parents, health issues, etc.

But, there are some forms of internal resistance we should consider:

1 — Writer’s Block. I have NEVER suffered from writer’s block! Ever! For me, it is a matter of finding enough time to sit down and do a “creative” dump of all the ideas whirling around in my mind. But, in March, I took a week off to write and for four straight days, I sat in front of the laptop and did NOTHING! Blank! Empty! So, how do you overcome the resistance from writer’s block? I realized that in my study, I have surrounded myself with creative “cues” that unlock the creative forces in my mind. But, in a strange location those cues are gone. I had to develop another way to stimulate my creativity. So, I just started writing on the blank page — just putting down thoughts and ideas as they flew through my brain. Soon, by day five, I was cooking with gas!

So, what do YOU do to break the writer’s block? Share some tidbits with the rest of us.

How do YOU overcome procrastination?

3 — Fear. This is a BIG one. Who am I to write? Where do I get off thinking I can be a published author? What will people think about me when they see what I’ve put down on the page? Do I dare bleed all over the page?

Fear is the biggest culprit for me. Fear of rejection. Fear of criticism. Recently, out of nowhere, an email arrived from someone I’ve never heard of. Turns out this person had somehow gotten their hands on a script adaptation I wrote back in 1988 of a play called “The Living Last Supper”. When I was handed the original play by my fine arts minister at the time, I was told the play was out of print. I was asked to adapt the clunky, sort of King’s English version to a more modern sounding version and to shorten the dialogue so a group of inexperienced deacons could play each one of the disciples. I adapted the script. It was so successful, our church performed it for eight straight years. During that time, I was asked for the script and I shared it, ALWAYS informing the person that it was an adaptation of the original play.

Well, this stranger took me to task for plagiarism. He accused me of passing off my adaptation as the original play. How in the world did he even get a copy of my script? I hadn’t dealt with that script for over 16 years! But, the man insisted I do the “right thing” and withdraw the script and put a disclaimer on my website. So, I did. I did so out of outright fear! What if this man ruined my albeit tiny, but growing writing career by calling me a plagiarist! I realized I had to do the right thing and correct a wrong I was not aware I had committed. But, it was still MY responsibility!

And, here is the final solution for Fear. I always stop and ask myself, “What is the Lie?” Am I a plagiarist? NO! Am I worthless? NO! Can God use me for His work? YES! Fear can be conquered so simply by asking this one question. And, here is why. Who is the Father of Lies? SATAN! Who is the Father of Truth? GOD! And, from fear and anxiety and procrastination and even some of those external sources of resistance, the TRUTH will set us FREE!

Oh, by the way, I seem to recall a little verse that says something like this:

But he gives more grace. Therefore it says, “God opposes the proud, but gives grace to the humble.” Submit yourselves therefore to God. Resist the devil, and he will flee from you. Draw near to God, and he will draw near to you. James 4:6-8 ESV

(I want to be sure and give the proper source so I will not be accused of plagiarism!)

How do you handle fear? Share some of your wisdom with the rest of us!