CBA/ICRS — Tosca, Ted, and Charles, oh my! The Afternoon Part 2

Now, after lunch, the fun began! 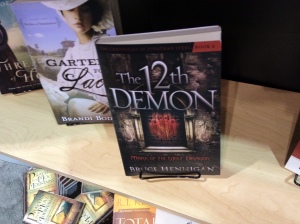 I ran into Debbie Strang at the Charisma Media booth and she took me over to a shelf and showed me a mockup of my upcoming book, “The 12th Demon: Mark of the Wolf Dragon”. I cannot begin to tell anyone what it is like to hold your next book in your hands! It was awesome as you can see by my smile in this picture.

Then, Atalie, part of the Charisma team, told me that Matthew West was signing copies of his CD single RIGHT NOW! So, having just heard Matthew, I followed Atalie and got in line. She had to leave to go meet with the next author for his book signing and asked me to get her an autographed copy. It was interesting standing in line for a short while with her and a team member from Tyndale and listen to their “inside scoops” of prominent authors such as James Scott and lots of romance writers whose names you would instantly recognize. Then Atalie was off and I was standing in front of Matthew West. I told him how much his song meant to me and how I appreciate his desire to tell the stories all around us. He then looked at the card with my book cover on it (12th demon) and asked all about my book. He took a card and said he would read it when it came out. We’ll see!

I then took Atalie her CD and headed over to the FaithWords booth to get in line to see Tosca Lee and Ted Dekker — the biggest names right now in Speculative Christian Fiction.

Now, several weeks ago, I wrote a review of “Thunder and Rain” by Charles Martin. He is, without a doubt, one of my favorite top 5 authors. As I walked up to the booth, I spied a pile of “Thunder and Rain” books. I was stunned! Was Charles Martin here? I asked the man piling up the books and he pointed right behind me. There was Charles Martin talking to his wife. I had just missed his book signing. But, being an opportunist, I grabbed a book and, like a trembling fanboy, asked Charles to sign my book. He was gracious and funny and signed my book while I hemmed and hawed and tittered and giggled. I finally got control over myself and we had a nice conversation about his writing, his books, and the fact I was an author.

Then, heart pounding, I got in line for Tosca Lee and Ted Dekker. I handed Tosca my card with my book cover on it because I had written my name and my wife’s name on the back. At my book signings, I always have people write down the name they want the book dedicated to. This avoids any misspellings. Now, while in line, I spied “The Sanctuary”, Ted Dekker’s newest solo book and the front cover was suspiciously similar to the cover of “The 12th Demon” with an arched doorway just as my book had. I spoke with Tosca and Ted both about my book and when Tosca turned the card over, Ted’s mouth fell open. He jerked the card out of her hand and stared at MY cover. Tosca said something about how much it looked like his newest book cover. Ted looked up at me.

“Who did this cover?”

“The awesome graphic designers at Charisma Media.” I replied.

“This is better than my cover!”

So, here is a shout out to the graphic designers at Charisma. Ted Dekker loves the cover design for MY book! Way to go! I walked away proud to be an author for Charisma!!!

And, at that point, I had to leave and go pick up my daughter at the airport. But, it was an incredibly, unbelievable, fulfilling day at ICRS. And, tomorrow will be better!