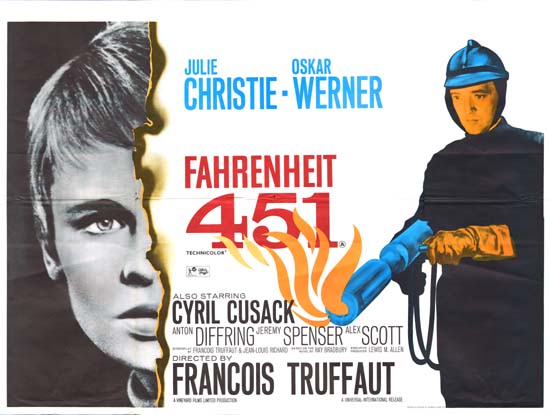 Ray Bradbury is my favorite science fiction author. He passed away in 2012 and his legacy is still strong among science fiction and fantasy readers. But, Bradbury refused to allow his books to become ebooks. His devotion to the printed page is powerful. So powerful, he wrote an entire novel about books. I am currently re-reading “Fahrenheit 451” and last night started watching the movie again. For a film made in 1966 it is remarkably prophetic. In one scene in the living room of Montag, the fireman, his wife is asked to be a part of a theatrical production on television. There against the wall of the living room was a flat screen television that can be found in any Target store today. The “play” in which she was a part was very boring and involved two men talking about where people should sit when they arrived at their party. One of them would turn to the screen as if addressing “Linda” and ask for “Linda’s opinion”. A red light would blink and Linda would respond. It was obvious from the follow up dialogue that it did not matter what Linda said, the plot was contrived to move along without her real input. But, the idea that the television had a camera that could see the viewer was far ahead of its time.

The bland and boring television “theatrical” production existed in this story because books had been banned. Firemen spent their time burning books. Books have been outlawed by the government because they “make people unhappy”. Here is a quote from the novel:

“If you don’t want a man unhappy politically, don’t give him two sides to a question to worry him; give him one. Better yet, give him none.”

This is about censorship. Someone, somewhere has a better idea of what you and I should be able to read than we do. We cannot be trusted to make the right kind of judgment about the content we are putting into our minds. We must rely on some agency to decide that for us.

In my recent interviews about video game violence, I am always asked should we ban violent video games. My answer is always a resounding “No”. Why? Because that is censorship and once we start down that slippery slope, before you know it firemen will be invading our homes and burning any creative content in our possession.

I am an author. I write thrillers with a foundation in my Christian worldview. I don’t have to tell anyone who is a Christian how toxic the social climate is now to Christianity. The New Atheists are winning the war of ideas and calling for governmental intervention. They want religion to be outlawed. They want to classify parents who teach their children Christian concepts as “pedophiles” and teaching religious concepts as “child abuse”. The post huge billboards calling for Americans to “Dump the Myth”. Dawkins, Bill Nye the Science Guy, and even Elton John have taken up the cause. Destroy Christianity at all cost. Push it out of the public sphere. Eliminate churches and religion.

If you think I’m overreacting, you are woefully uneducated about this topic. We are not some Communist controlled country like China where Christians have to go underground. But, that is coming. The threat of censorship is real, loud, and pervasive. In the scientific community, if you profess that you a believer, you are blackballed, denied tenure, and sometimes outright fired. If you voice an opinion in a country that supposedly guarantees freedom of speech, you are vilified in the media and labeled as a “hatemongerer” by the well meaning people who become themselves hatemongerers in the process!

Whether or not your a believer, this should set off every alarm in your mind! It is thought control of the highest order and it is not the only area where others want to enforce their ideas and concepts upon you! So, no, I don’t want to see violent video games banned. For one thing, that would make them even more popular!

What I do want to see is a culture that emphasizes accepting responsibility for our decisions. Instead, as a culture we foster a victim mentality. “It’s not MY fault.” is a common response to bad things that happen in our culture. If you purchase a violent video game and you play that game for hours on end and then you carry out some kind of violent action then the decision to do that is yours. You cannot blame the manufacturer or the artist who designed the game. The decision to put those ideas in your heart and mind is YOURS and yours alone. Where our culture has failed is in taking away a social foundation for ethics and behavior and replacing it with consumerism, narcissism, and denial of our reality with the replacement of reality with a virtual reality.

What we must do as a culture is cultivate an environment of responsibility on the part of all three pillars of this problem:

Video game makers have stepped up to the plate and have placed labels on their games detailing content. But, in my opinion, we need a more detailed ratings system that parents and users can understand. For instance, many games have hidden levels that contain graphic sexual content and this may not be reflected on the game label.

Retailers must accept the responsibility of NOT selling mature games to children. Nor should they market those games.

Finally, parents and USERS, should be more wary of the content of some of these games. Parents tend to be intimidated by technology and push their teenagers away into their tech world and let video games and media “entertain” and babysit their kids. Parents must do the HARD thing and get involved in their children’s lives.

Users must recognize that IDEAS have CONSEQUENCES and stop living in denial. In one recent interview, a young woman told me she had just finished playing “Grand Theft Auto” and she didn’t feel like jumping in her car and running down any pedestrians. But, what happens the next time she is in a car and feels road rage? How will her experiences in the game affect her behavior. Studies have shown that video games do affect decision making no matter how loudly the video gaming industry tries to deny it. This is common sense. What we put into our minds will change the way we act. This is well known and well understood. It is the power of propaganda, of mind washing, of advertising. We are living in denial of this reality.

But, we don’t need government censorship. Censorship should start in our MINDS. Censorship is a personal tool. You don’t want to feel the urge to kill? Find out what would motivate you to think on that and do not allow it into your mind. Know your heart. Know your mind. Know yourself! Let’s keep the right choice where it starts, in our hearts and minds. Don’t give the government that right or we’ll end up at the business end of one of Bradbury’s firemen!