It is Saturday morning here in New Zealand, Friday America time and I just witnessed one of the most moving and beautiful sunrises I have ever seen. We are now in Napier at Alex and Grant’s house. I’ve gotten behind on my blogging so I wanted to catch up on the photographs.

Let’s see, on Tuesday we drove to Waitomo cave area and went through the cave with the glowworm grotto. The glow worm is a fascinating insect. The female lays an egg in the caves then dies since the adult male and female insects have no mouths! The egg hatches and the larva emerges as the glow worm. The worm has a bioluminescent tip that glows in the dark. The worm spins a long single thread. The thread is sticky and the light attracts moths and insects in the cave. When the insects fly toward the glowing light (and this also includes the aforementioned adult insects) they get stuck on the thread. The glow worm then pulls the thread up and feasts on the insects. This fat and happy life lasts for 9 months. But, eventually, every larva turns into an adult. The male adult is waiting patiently for the females to emerge from their cocoon and impregnates them immediately before they die from starvation. What a life!!!

I could not take an photos within the glow worm grotto. A river passes through the cave and at the bottom of the cave we loaded onto a boat in almost total darkness. Our hostess, Dorene then pulled us quietly through the grotto. In the hushed silence where only the occasionally tinkling of water drops from the stalactites broke the dark solace, we moved through the grotto like the Phantom of the Opera gliding his boat across the waters of Paris underground. Above us were thousands of tiny blue green glowing dots. To me it was a wondrous site. To the glowworm, it was just life. Just a passing through this world from egg to larva to pupae to adult. All on a 10 month cycle. The difference between the glowworm and me, of course, lay in my ability to appreciate the beauty of what I was seeing. More on that later.

Here are some pictures from our cave trip.

The Cave Names I can’t quite yet pronounce. 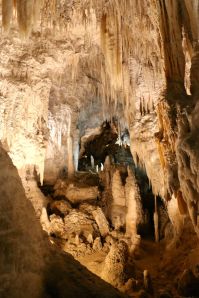 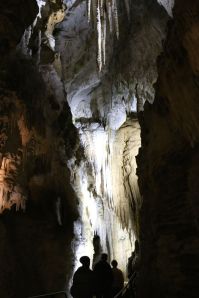 On Thursday and Friday, we traveled to Rotorua where the lake filled a huge extinct volcano crater. But, the volcanic activity was far from dormant. Below are numerous photos of the thermal “playground” around Rotorua. The air was cool and crisp but tainted with the odor of sulphur. Our room was situated overlooking the beautiful lake. By now, I was getting Sherry’s cold and I spent the first night in Rotorua shaking with a high fever. Alex, a more than capable nurse, watched over me as we sat on the patio overlooking the lake beneath a billion glowing stars. I was shocked to recognize Orion’s belt and Scorpio and there, above me was the Southern Cross ruling the southern hemisphere sky as our Big Dipper and Polaris, the north star, ruled the northern sky. Alex talked me through my fear of having some kind seizure due to my high fever. Here I was sick in a foreign country my mind filled with fears that most people would never think about (as a doctor, I know too much!) and yet, I was at ease with Alex just a few meters away. I was very thankful she was there to watch over me. I made it through that first night. Thursday and Friday were busy days visiting Rotorua and its many hot springs, geysers, and steam vents. Here are some photos from that visit.

The colors are from different chemicals

The Jet Boat at Huka Falls

I will pause now for a day or two. We are resting up here at home in Napier before tackling the South Island. Tomorrow (Sunday) we will go to church with Alex, Grant, and their boys and I’ll have more to say then. For now, I am resting and trying to heal.

Posted in My Writing

Comments Off on New Zealand Days 4 and 5