It Wasn’t My Star Wars! 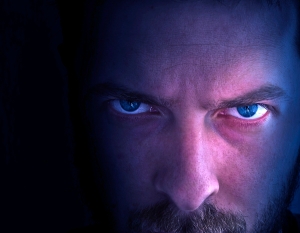 I glanced at my watch. There was no way they could wrap this story in the time left for the movie! Where was this thing going?

I must admit I was shocked at several of the turning points in the story that I never saw coming. I mean, really, that whole thing about the parents?

And, I did not want HER to like HIM at all! And yet, there was a growing attraction there I never saw coming. Really! Can’t she see his dark side will always win out over his good side?

And, abandoning the training as a Jedi to save your friends? That can never turn out well.

I wanted to scream at the screen! I wanted to rant and rave in protest. This is NOT how I would have written the story. In fact, I had written MY version of the movie in the months and months since the previous movie and I would never have done this. A different director from the first movie had taken this train down a dark and dank tunnel and taken the wrong track!

END_OF_DOCUMENT_TOKEN_TO_BE_REPLACED

Comments Off on It Wasn’t My Star Wars!

They call him the Shat!

I am in Dallas at FanExpo, a massive comic con with over 50000 attendees. Thursday night I had the opportunity to spend an “intimate evening” with William Shatner. I decided to bite the bullet and purchase a ticket to this special event for my upcoming birthday. I’ll soon be 61! 61!!!

But after listening to William Shatner for an hour, who at the age of 85, is more active than I could imagine, I’ve decided 61 is very, very young! 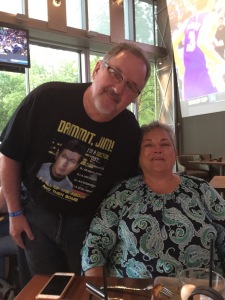 This year is the 50th anniversary of Star Trek and to celebrate that milestone, William Shatner is appearing at this event. I lined up about an hour before the event with about 15 other people. We entered a good sized conference room and there were eight couches in two rows along the front of the room with about six rows of folding chairs behind them. I got the last couch seat.

We were soon informed we would all line up and trek, get it, trek, down the convention center to the photo area for our photo op with William Shatner. After this, we would return to our room and our seats and he would come and speak to us for about 45 minutes then sign autographs. Ordinarily, a photo op is $100 and an autograph $100 so the evening was a bargain!

I was wearing a shirt with a picture of the original Dr. McCoy and the quote, “Dammit, Jim, I’m a doctor not a . . .” Followed by four choices. When I finally walked into the photo booth, I was amazed at how good he looks for a man of 85. He appeared very healthy. He smiled at me and liked my tee shirt. I paused, had my photo snapped and then was whisked out of the booth.

He arrived in the room after the photo op and instead of sitting in the appointed chair, hitched himself up on the table on which he would be signing autographs. He immediately talked about how he had never been invited to a typical “Hollywood” party with a rowdy bunch of “naked women”. He said he preferred an intimate get together such as ours and would like to answer a few questions. 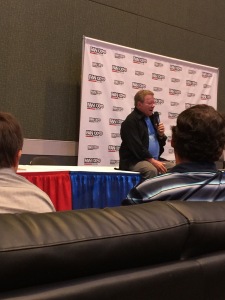 The first question was about how he and Leonard Nimoy met. He talked about Nimoy and their first work together on the Man from UNCLE and how he had no recollection. Then, he talked about working with Nimoy on Star Trek. He went on to discuss how deeply he missed Leonard Nimoy, his best friend. He talked about the day Nimoy died on a Friday and his funeral would be on Sunday morning. He said he was committed to a Red Cross event in Boston and would have to decide what to do. He then went on to talk about how quickly people are forgotten and how the pain from loss fades over time. But, Leonard Nimoy would not be forgotten. And, he talked about how Leonard would understand the importance of doing something that would make the world a better place such as helping to raise millions of dollars for Red Cross.

Another question led him into a long discussion of the difference between Star Wars and Star Trek. Story. Characters. He talked about how Star Wars was a “ride” and Star Trek was more story and character development. He then talked about story originating from a bunch of us “sitting around a campfire talking about how one of them stabbed a dinosaur in the eye” and Story was born. He then said in 10000 years we will be talking about UFOs and how we will tell the story of being probed “by a purple alien and having its baby”.

He was then asked if J. J. Abrams offered him a role in the original Star Trek reboot. He said he met with J. J. and read the script and it “was awful”. I realized he had given him another script other than the one that was shot. He told J. J. he would only be interested in a role if it “made an impact on the story and wasn’t just a cameo”. When he found out Leonard Nimoy was in the movie he called him and told him “Your realize that you are old and when you go back in time, you will still be old!”

He then talked more about Star Trek versus Star Wars and said that the first seven movies he was in made about $100 million and cost about $30 million to produce. And then, the next generation movies were supposed to make more money and they didn’t. I think where he was headed with this discussion was the idea that Star Trek works better as a television show because it can concentrate on story and character development. Star Wars is “a ride” and J. J. Abrams’ Star Trek movies were “rides”.

The last question was “Do you regret not taking a role you were offered.” He then talked about his past four weeks. He traveled all over the world doing various events and appearances and I don’t know how a man his age could do this! It was incredible. He ended up by talking about flying to Dallas Wednesday night for this event. He said he has had the opportunity to make a difference in the world like “ripples going out and coming back” and he wouldn’t trade any of that for a big movie role.

He said he has his immediate family in Los Angeles and has everyone over for Sunday dinner so he couldn’t be happier or healthier. He talked about feeling the pressure of time and how quickly life can be gone but he wanted to continue to live and make a difference as long as his health would let him.

A few short notes of some things he said. He talked about his appearance on the original Twilight Zone and the “little furry monster” on the wing. He talked about how in the “old days” in Hollywood a movie would have 10000 extras. How did you feed them? All those people “today are computer generated”. He mentioned his horse riding events and how he was a top championship horse rider and his events for charity raises lots of money.

He told an amusing story about flying to Dallas and having a bad cough. He was sitting beside “a little Asian girl” who had no idea he was Captain Kirk because she probably only knows Chris Pine and she thought “I might be dying”. At this point, he started coughing quite a bit and waxed profound about phlegm. “You’ll never forget tonight. See how intimate we are. We can talk about my phlegm.”

We then lined up and he signed and personalized autographs. I had a Star Trek Manga that came out in 2008 with a collectible poster of the illustrated version of the original cast. He signed it for me and once again said he liked my tee shirt.

I packed up my stuff and walked back to the room through a misting rain. Tomorrow, Doctor Who!!!!