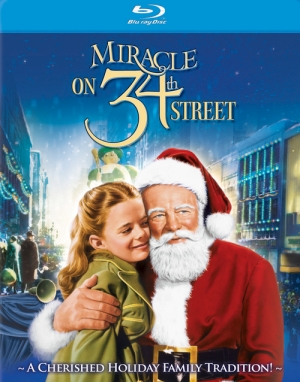 And now, for some fun. Over the next few days, I am going to talk about three of my favorite Christmas movies. Movie #1: The 1947 classic, “Miracle on 34th Street”. I’m not talking about the later version shot in the 1990’s but the original starring a very young Natalie Wood and Maureen O’Hara.

Here’s the premise. It’s Thanksgiving Day and Doris Walker is the organizer for Macy’s Thanksgiving Day parade when she discovers the Santa hired for the parade is drunk. Out of nowhere, a man resembling Santa arrives to tell her of this tragedy and she asks him to take the place of the drunk Santa. This man proves so convincing, she hires him as Macy’s official Santa for the store. The man, calling himself Kris Kringle, delights children and surprises a mother when he tells her she can find a fire engine at a rival store. The mother tells Doris’ boss, Mr. Shellhammer of what a wonderful “gimmick” to let Santa steer mothers to wherever they can find the best bargain. Mr. Macy sees it as a fantastic development and wants Kris to continue to be the store’s Santa, only Mrs. Walker has fired him when she realizes he claims to be the real Santa Claus. 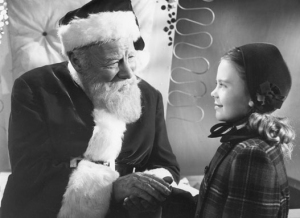 Wrapped into this story is Doris’ young daughter, Susan. Doris has told Susan all of her life there are no fairy tales and she has to believe in the harshness of reality. This comes out of Doris’ disappointing marriage to Susan’s father that ended in divorce. A next door neighbor, Fred Gailey warms up to Susan and takes her to see the new Santa. Susan is skeptical, of course but is shocked when Kris speaks to a Dutch orphan who cannot speak English and ends up singing a Christmas song with her in her native tongue. 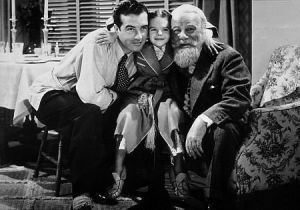 But, there is a negative development, of course. For Kris to stay on, he has to be evaluated by the store’s neurotic psychologist, Mr. Sawyer. Mr. Sawyer thinks Kris is dangerous and after he fires a young man who works as a janitor because he dresses as Santa Claus for an orphanage, Kris is outraged and pops Sawyer on the head with his cane. Sawyer has him arrested and committed and now, there is no Santa for Christmas. Mr. Gailey, the attorney, takes on Kris’ case and because of this, gets fired from his firm. I won’t tell you how he manages to get Kris off or how Kris proves to Susan he is very, very real.

This movie is a delight and explores so many themes that resonate with our society today. Here they are:

1 — Christmas has been hijacked by commercialism. If it were not for the power of the almighty buck, I believe our government would have already passed laws to make it illegal to use the word “Christmas” in public since it carries a heavy religious meaning. In many ways, Christians should be thankful we are such a greedy society. Stores that used to put up “Happy Holidays” are now threatened with boycotts and have returned to using “Merry Christmas”. The only reason? Money! Here is what Alfred, the young janitor had to say about this: 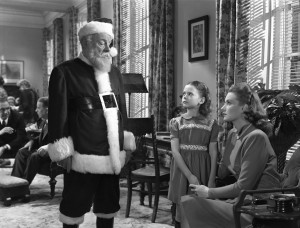 2 — Imagination is essential to the minds of children and adults. The recent death of the atheist Christopher Hitchens points out the great progress the “new atheists” have made in eroding the power of imaginative thinking. By depicting belief in God as a delusion, the new atheists have unwittingly destroyed the very thing that has allowed us to come up with art, music, and inventions that have sparked human progress: imagination. If we do away with any supernatural thinking, we do away with imagination! And without imagination, we are no better than animals, which is what these new atheists claim we are anyway. What this movie so eloquently shows is the struggle between harsh reality and playful fantasy. There is room in our minds for imagination and imagination is what separates us from the animal. Here is what Doris Walker had to say about how she wants her daughter to be raised:

“By filling their heads with fairy tales they grow up considering life a fantasy instead of reality.”

3 — Maybe our politicians are not so sane after all. I won’t comment on this very much but there is one brilliant quote from Mr. Shellhammer in talking about how “crazy” Kris Kringle is:

“Maybe he’s just a little crazy, like painters or composers or some of those men in Washington.”

4 — Christmas is more about the birth of the Savior in the manger than it is about shopping and partying and gift giving. But, somehow, Jesus gets lost in the shuffle. Here is what Kris Kringle had to say:

“Christmas and I are getting lost in the shuffle. Christmas isn’t just a day. It’s a frame of mind and that’s what has been changing.”

More truer words were never spoken. But there is hope. As Doris finally realizes:

“Faith is believing in something when common sense tells you not to.”

Watch “Miracle on 34th Street” and think on these things. Let it fill you with a sense of the divine; an appreciation for love and concern this time of year. Let it remind you and me that Christmas is about the Christ child who came for all of us; to bring us peace and love and mercy.