Of Caterpillars and Death: “Oh, my!” 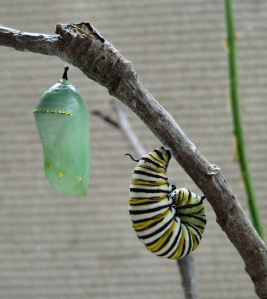 Steel looked away. “I feel like I’ve only lived for two years, Claire. I can’t remember most of my life. I’m not ready to die.”

He felt her hand on his cheek. “Silly, I don’t want to die, either. I said I’m not afraid to die. Imagine you’re a caterpillar.”

Steel raised an eyebrow. “A caterpillar?”

“Just go with it, Jonathan. Your whole life is spent crawling along a leaf and eating. That’s all you do. You have no appreciation of where the leaf is. You have no idea of how far you are from the ground if you were to fall. You never see the bird that swoops down to devour you. Your appreciation of the universe is limited. And then, one day you feel this horrible sensation of dread. You feel a change coming. You’re going to die. You dread it. You fear it. You go on eating and crawling pretending it’s not going to happen. It happens. You spin yourself into a cocoon of death and know no more.” Claire’s eyes were wide with emotion. The night air grew still and close, thick with humidity. Time seemed to slow.

“And, then Jonathan, you awaken. Your body stirs and you realize you’re no longer dead. Your cocoon falls away and you spread out huge, luminous wings. You crawl away from your death shroud and you take to the air! You’re no longer a caterpillar. You’re a butterfly! You fly through trees and fields of flowers. You see the sun and the stars. An entire universe you never could have imagined is yours to appreciate. And suddenly, you spy a caterpillar crawling along its leaf. You watch your former self and you wonder how you could have ever wanted to stay like that.”

“That is death, Jonathan. We’re fat, clumsy caterpillars waiting for the day of metamorphosis. We fear the cocoon. But, when we emerge on the other side, we’ll look back from God’s eternal perspective and wonder how we could ever have wanted to stay like this.”

I’ve been overwhelmed at the response to this one passage in “The 13th Demon: Altar of the Spiral Eye”. Some say it is “profound”. Others say it is “comforting”. But, why?

Just yesterday, we learned from a very moving testimonial to the life of Steve Jobs by his sister that his last words were “Oh wow. Oh wow. Oh wow.” What did he see? Did he emerge from a cocoon and see his new form as a “butterfly” free from the confines of this earthly shape? Or, did he see the Creator in all of His splendor, majesty, and grace? No one can say for sure. But, he did see something.

This weekend, I also watched “The Captains”, a documentary by William Shatner interviewing all five actors who have played a captain of a starship in the Star Trek franchise. The most odd person was Avery Brooks who spoke in lilting metaphors and piano riffs and made very little sense whatsoever. The most concrete was Shatner himself, taking every opportunity to tell his own story of his life and how it was affected by his stent as “Captain Kirk”. But, what was most disturbing, most troubling was the answers he elicited from those he interviewed about God and what happens after death. Most answered, “I don’t know.” And, Shatner’s answer was his final lines as Captain Kirk in the ill fated “Generations” Star Trek movie that bridged the gap between the classic Star Trek universe and the Next Generation universe. As Captain Kirk lay dying his final words were, much like Steve Jobs’, “Oh, my!” I guess Shatner was expressing his desire that he hoped something was out there and whatever it is, he will be surprised.

Recently, the Discover channel premiered a show “Curiosity” and the opening episode answered the question, “Did God make the universe?” The physicists and cosmologists on the show were emphatic. There is no God. We don’t need God. The universe made itself. Even Stephen Hawking proclaimed there is no God and heaven is a “fairy tale”.

How then to put all of this together? I would say that each and every person listed above is nothing but a fat, clumsy caterpillar. Of course from our limited perspective, we can say there is no God; no transcendence; no afterlife. After all, what is our greatest desire? As a caterpillar it is to eat more leaves. In fact, give me a rain forest of leaves without predators and all of eternity to eat leaves! Wouldn’t that be the best existence? And, to defend such a Choice, for it is ultimately a choice; a worldview; a personal decision what to believe; yes to defend such a Choice we must say there is no butterfly! There is nothing beyond the cocoon. That makes all of THIS more important; more desirous; more under MY control. For the butterfly lies beyond my control in another dimension of reality that many would called the realm of “fairy tales”. 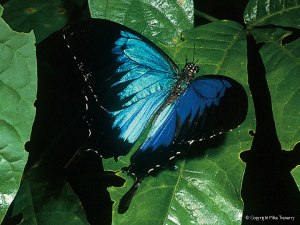 Steve Jobs triumphed the adage, “Think Different”. It is time for us to think different; think beyond the leaves and the clumsy state of existence and realize there is something beyond us; something that brought all of THIS into existence and something that has prepared an existence as fantastic and unimaginable as a butterfly is for a caterpillar. We are destined for that far country where we will fall at the feet of our Savior and say “Oh wow! Oh wow! Oh wow!”