How I Became Captain America

This is how I became Captain America.

It was late on a Tuesday and I was slaving over the latest Mother’s Day gift I had produced in my long life of eleven years. At our Cub Scout meeting, we were making trays for our dear mothers to serve us food and drinks on. Mr. Talbert had cut out round wooden slabs with white Formica on them and our job was to staple rope around the edge and make two rope handles at opposite sides.

My handles were slightly off center and every time my mother would load up the tray and pick it up, one side would tip downward and glasses of lemonade would fall to the floor. Jelly glasses of lemonade. We drank out of glasses from jelly jars.

My mother was the original master of recycling. She would take everyone’s drink left at the end of a meal and pour ice and all into a large glass and then DRINK it!!!! The original Suicide drink!

Back to the tray. I was upset. I was chagrined. I was ashamed. My mother’s gift was useless. In a temper tantrum I jerked all the rope off around the edge and jerked off the handles and then threw the thing across the front yard. Amazingly, it sailed through the air like a giant, fat Frisbee, bounced off of a tree and imbedded itself edge down into the dirt. 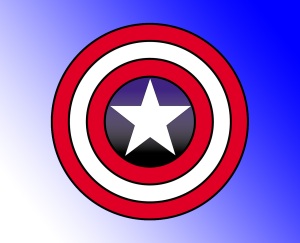 I gasped. I raised an eyebrow. I chuckled. I had a shield! Just like my hero, Captain America. I ran into the house and dug through a drawer until I found the black, red, and blue Magic Markers. Now, I was a student of math so I wanted my concentric circles to be perfect and my star to be just right. So, I took out my compass and some string and a ruler and I marked off the rings and drew the star on the slick white surface of the shield. Then, I colored in the red rings and the blue background for the white star. I cut some leather straps from an old belt and made myself a handle on the back.

I stood proudly in front of my mirror in my room and grinned. I was Captain America holding up the shield that would protect me from all the evildoers in the world.

Fast forward to 2005. I was working on the script for my play “The Homecoming Tree”. It is the story of a group of people living in a boarding house in Shreveport, Louisiana at the beginning of World War II. The main character was a thirteen year old boy who was fascinated with beating the Nazis. I had interviewed my parents and my late brother extensively in the preceding few years about life in 1941. When I asked my brother who his heroes were he said, “The Shadow, Captain Midnight, and, of course, Captain America.”

Captain America? In 1942? I did some research. As anyone who has seen the movie is aware, Captain America had his start as a comic book during World War II. It was shocking to realize that my brother and I had shared this connection I was never aware of. He passed away in 2008 but he had the opportunity to see “The Homecoming Tree”. My mother passed away in 2004, but not only did my father get to see the play, he sang “There’s a Star Spangled Banner Hanging Somewhere”, a 1941 song that I recorded and played as part of our radio music playing the background during the play.

I gave my main character a love for Captain America. I got Randle Milliken, the actor playing the young boy to make his own uniform. Guess what he did? He found an old serving tray made out of plastic very similar to my tray and put the star and the stripes on it. Only, he didn’t make the lines perfect as I did. He even found some old red gloves and when he came out onto the stage the first night of performance as “Captain America” I was back in my front yard wrapped in heat and humidity, shield up to ward off the bullets of my enemies, sweat soaking my blue tee shirt as I fought off the evil drones of death and destruction. 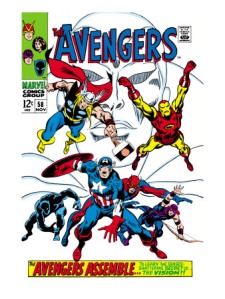 So, this weekend, I cannot wait to see “The Avengers”. The original Avengers were my heroes way back in the 1960’s when I discovered comic books and I cannot wait to hear those words: “Avengers Assemble!” and see Captain America once again stand up for what is right! I’ll see you there!

Comments Off on How I Became Captain America