“We spent two days in Auckland when we could have been here?” 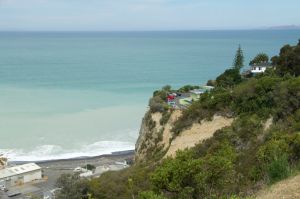 Sherry nailed our reaction once we arrived Friday evening in Napier. We’ve spent the last two days at “home” with Alex and Grant’s family here in a city known for its art Deco appearance. In 1931, an earthquake hit Napier and the city rose several feet above sea level. Much of it was rebuilt in the current architectural style leaving behind a delightful town perched on the emerald green waters of Hawke’s Bay. The moment we saw the ocean, we knew we should have been here long ago. Don’t get me wrong. Auckland was exciting and bracing and something to be seen. But, in all of our travels, Sherry and I have always found the smaller towns more inviting than the busy, bustling cities. My one exception would be New York City and London. We loved both cities but they are creatures unto themselves.

Napier resides on the eastern coast of the North Island tucked into Hawke’s Bay. Just south of Napier is Hastings and surrounding this area are mountains and wine country. We passed through orchards and vineyards and more rolling hills dotted with sheep. As we drew closer to the east coast winding our way up and down through these wonderful mountains, the hills grew greener and more lush. The tall, waving fronds of the silver fern — the symbol of New Zealand — were soon replaced with tall pine trees. We instantly felt at home with my thoughts drawn back to the pines of our Louisiana. The only difference would be the lack of a thick film of yellow pollen we would hopefully miss out on this year. March is the autumn for New Zealand.

We met the family at a Kiwi barbecue on Saturday. The meal was sumptuous, delicious and capped off with several huge desserts ranging from trifle to banana cream and upside down chocolate pudding cake and cupcakes. Everyone here is so friendly and so open and accepting. As I mentioned in my last post, this is the culture we have lost in America. Grant assured me New Zealand was about 15 years behind America in adopting our ways. Let us hope and pray New Zealand does not catch up with us. Here, civility, manners, kindness, friendliness, hospitality are all a way of life. In our own country, we are in danger of forgetting these virtues.

Before I go on about our trip in Napier to the mountaintop of Te Mata or to the beach in downtown Napier I want to finish out our first week in New Zealand with a few photographs from the past seven days.

Our first stop was for coffee last Sunday and now I understand how much they love their coffee! Medication we have gotten to know all too well!

A hobbit’s work is never done!

But, there is the promise of the Green Dragon pub.

Oh, well, they put me to work at the pub! 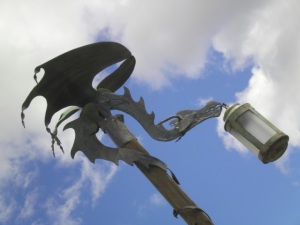 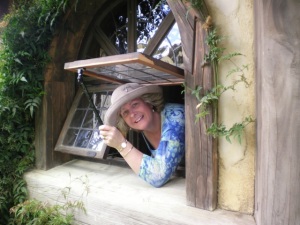 Alex popped in for a bite!

Okay, a giant pukeko (pooh-keck-oh) made of corrugated iron.

The New Zealand opossum. More about this later.